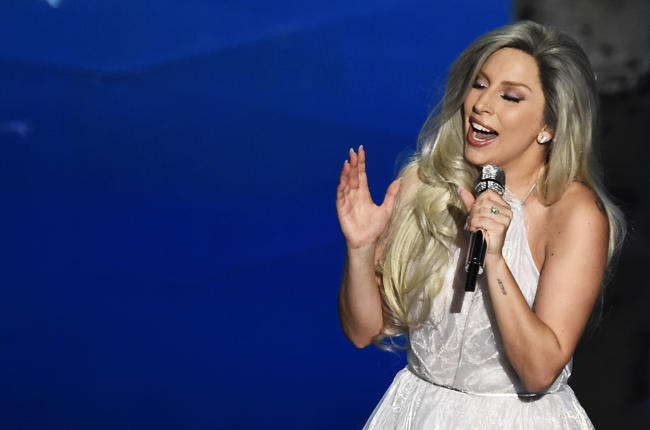 LOS ANGELES, Feb 23:  Host Neil Patrick Harris’ musical opening act paved the way to performances by Lady Gaga, Jennifer Hudson, Maroon 5 and others at the 87th Academy Awards ceremony, turning it into a song and dance extravaganza.
Harris’ sing-song opener with actors Anna Kendrick and Jack Black was followed by boyband Maroon 5, who were the first to take the stage at the Dolby Theatre. The group gave a heartfelt performance of ‘Lost Stars.’ The original song, sung by the band’s frontman Adam Levine, 35, was a best song Oscar nominee from the musical romantic-comedy film, ‘Begin Again’.
Common and John Legend brought the house down with a performance of their “Selma” theme ‘Glory.’
Two weeks after the song closed the Grammys, the rapper and the singer performed their song at the Academy Awards, where it won for best original song.
After the pair’s performance, which featured a chorus marching behind Common and Legend and practically into the audience, several audience members including “Selma” star David Oyelowo and Chris Pine were visibly in tears.
Lady Gaga shed her eccentric pop star get-up as she sang a medley of hits from the Academy Award-winning film, “The Sound Of Music”, as a tribute to celebrate the movie’s 50th anniversary.
Gaga wore a Swan Lake-type gown while singing ‘The Sound Of Music,’ ‘My Favorite Things,’ ‘Edelweiss,’ and ‘Climb Every Mountain.’
Her performance was appreciated by “The Sound Of Music” star Julie Andrews.
Jennifer Hudson took to the stage to perform ‘I Can’t Let Go’ for the ‘In Memorium’ segment which paid tribute to the stars who passed away last year.
“This is for all the people who shared their talents and lives with us. We are forever changed,” said the musician and previous Oscar winner at the beginning of her ballad.
Canadian sister duo Tegan Quin and Sara Quin performed on ‘Everything Is Awesome’ from ‘The Lego Movie’. The jam-packed performance – in acknowledgement of the best song nomination – featured everything from a heavy metal guitar-playing Batman, to rapping comedians, to a cameo from Devo’s Mark Mothersbaugh, to Lego versions of the Oscar Statuettes.
Singer-dancers gave out the plastic mock-Oscars to Oprah Winfrey and other surprised stars in the audience. Wifrey, a producer on “Selma”, lost out the best picture Oscar to “Birdman”.
Tim McGraw paid a musical homage to country star Glen Campbell by performing on ‘I’m Not Gonna Miss You,’ from the documentary “Glen Campbell: I’ll Be Me”.
British singer Rita Ora, who is currently onscreen as Christian Grey’s sister in erotic drama “Fifty Shades of Grey”, performed the theme song of “Beyond the Lights” titled ‘Grateful’ at the Oscars. (PTI)