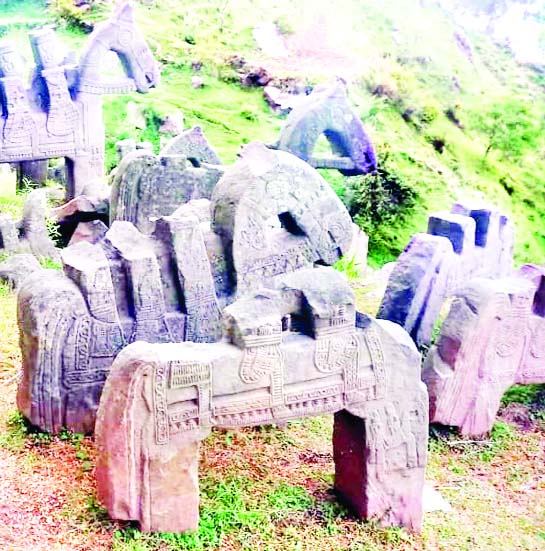 Nishikant Khajuria
GOOL, June 10: Poor road connectivity, negligible infrastructure and lackluster approach of the concerned authorities are keeping the scenic and unique places of  Gool out of the tourists’ itinerary  and thus depriving this region of availing the opportunities of  being another tourist destination  in the State of Jammu and Kashmir.
Ghora Gali with unique sculptures of unknown period near Gool town, picturesque Dagantop on way to Mahore, Ramakunda, Mutgala, Katazi, Narsingha, Jabber, Nakatop and Tatta Pani at Sangaldhan are among the charming spots with natural beauty, which have huge potential to attract tourists from within as well as from outside the State and boost economy of the area besides providing employment opportunities to the locals.
Ghora Gali, around 2 kms from Gool town towards Ramban is a unique place where sculptures of over 200 horsemen in various sizes and conditions are lying since unknown period. Some sculptures standing, some broken, some lying flat on the ground and many others, which may be still buried.  Besides these horsemen, there are some other sculptures like elephant images and deities etc.
The origin of these sculptures is unknown and some locals attribute the same to mythical Pandavas of Mahabharata period who carved these stones during their stay here.
Further excavation of the site can probably reveal more of these horsemen that have been completely buried over a period of time   but the Archeology Departments seems to have finished its job by only appointing a Class IV caretaker here, who remains invisible.
According to the locals, the area with sculptures of horsemen was fenced a few years back by the GREF authorities after which a small gate was installed for entry to the enclosure from the main road besides construction of some stairs and a canopy. However, there was effort by the concerned agencies for promotion of the site as a tourist place, lamented Mohd Ashrad, a local.
Dagantop with its meadows and scenic beauty like Patnitop can be another big attraction for tourists but the area is still virgin owing to no facilities and more particularly the poor road connectivity. The scenic meadows around the Dagantop area offer huge potential to prop up tourism with all attractions but there was no infrastructure development by the Government, rued Sajad Ahmad Gutt.
According to Haji Mohd Sultan of Budhan, around 5 kms from Dagantop, there is mysterious place between Ramkunda and Katazi, where a number of life size stone statues are found. These statues look alike members of some marriage party equipped with bands and other musical instruments. The origin of these mysterious statues is also unknown and attributed to the mythical Mahabharata period.
The area, where these stone statues are located, remains snow bound during the winters and is almost inaccessible for the commoners. Only the locals and a few adventure tourists have so far visited this mysterious and wonderful spot where a big natural lake named `Sarkatazi Jheel’ is also located.
Tatta Pani at Sangaldhan is another attraction of tourists visiting this place for taking a bath at this natural spring of hot water (Tatta Pani) due to which all skin ailments and joint pains are believed to be cured.   A number of people from Jammu Kashmir and also from other States visit this spring for holy dip but the inadequate facilities and bad condition of road discourage the visiting people. The five kilometer link road from Sangaldhan to Tatta Pani has never been repaired since years , rued Naseer Ahmad, president of the Sangaldhan Shopkeepers Association, adding that  adequate development of these tourist spots with good road connectivity can boost economy of the locals.
When contacted, Director Tourism Jammu, Smita Sethi told the Excelsior that the Department has initiated a major exercise for infrastructure development on the sites having tourism potential across the Jammu province, including Gool area.  “A Tourist Facilitation   Centre (TFC) is being constructed at Gool town and almost 75 percent work on it has been completed while at Dagantop, three suites are being developed and the work is also in progress there,” she said and added that funds for repair and refurbishment of TRC at Tatta Pani were also approved.
With regard to Ghora Gali, the Director further informed that a package of Rs 30 lakh has been proposed by the Tourism Department for development and landscaping of the place but the work is likely to be carried through the Department of Archives as this site is a protected monument.