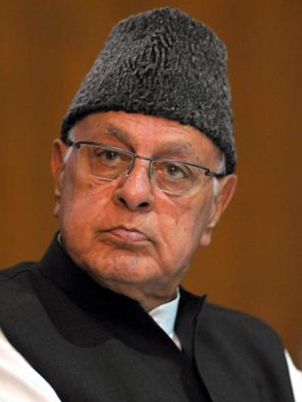 Excelsior Correspondent
SRINAGAR, July 26: National Conference president and Member of Parliament from Srinagar Dr Farooq Abdullah today expressed dismay over the distressing complaints of the Hajis from Kashmir over the lack of transport facilities including proper accommodation at Mecca, Madina.
While decrying the lack of facilities being given to the pilgrims’, Party president said, “Haji pilgrims are sending distressing messages to their kin back home about the scantiness of facilities being given to them at Mecca. The Hajis from Kashmir are complaining about the unavailability of transport including other basic facilities. The relatives of the Hajis from Kashmir are lamenting that the room arrangements for the Kashmiri Pilgrims are pathetic, overcrowded.”
“Most of the Hajis are first-time travelers so they take things as they get without even complaining, what they are actually eligible for. The rooms are in shambles and the bathrooms facilities are grimly. The pilgrims are also complaining that the khadims designated for Kashmir based pilgrims are least cooperative,” he further said.
Farooq said that the pilgrims are already going through duress in wake of doing away with Hajj subsidies. “For most of the pilgrims, it is going to be an experience for life time. The State and the Central Government are duty bound to make the trip comfortable for pilgrims. However, the reports coming from the Kashmiri pilgrims are not satisfactory. I have been receiving complaints from the kin of those who are on the pilgrimage. I take this opportunity to urge the Ministry of Hajj and Umrah of the Kindom of Saudi Arabia to address the issues concerning the Hajj pilgrims from Kashmir,” he further said.
Meanwhile, Dr Abdullah had a telephonic conversation with Union Minister for Minority Affairs Syed Muktar Abbas Naqvi in this connection. He urged him to address the problems concerning the Hajis hailing from Kashmir. He added that he will take up the issue at all appropriate forums.