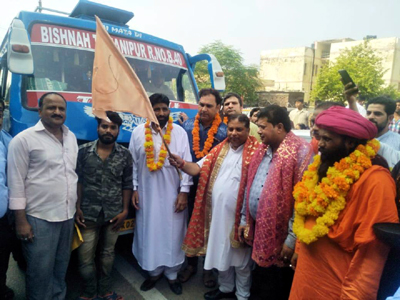 JAMMU, Aug 4: Bharatiya Janata Party (BJP), general secretary (Org), Ashok Koul today focused on the strong principled way of living should be followed by the BJP activists in the public life.
While addressing the series of meetings of Shakti Kendra Pramukhs of Basohli Constituency and district office bearers, district Morcha presidents, Mandal presidents conducted at Dak Bunglaw, Basohli, he said that the words and deeds of a BJP activist must match and project the strong and pure image of party having a rich heritage of sacrifices for the nation and the society.
He also asked the party leaders to take the message of simplicity and dedication in working to the grass root level worker and exhort upon him to work with a pure heart for the welfare of society. He asked them to conduct regular meetings for strengthening of the organizational structure at the booth level.
Koul said that the scene at national level has been changed by the Prime Minister, Narendra Modi led NDA Government at the Centre by its plethora of public welfare policies. He asked them to work with the same level dedication within the society to form a base for securing cent percent win in approaching elections of Panchayat to Parliament.
Koul prompted the party leaders to complete the booth committees at every Shakti Kendra. He asked to involve more youth in the party fold as India marches ahead towards young India. He also asked the party leaders to make use of social media widely so that the party ideology and schemes reach the targeted population.
MLA Bani and district president, Basholi, Jeevan Lal enumerated various development works undertaken and acquainted the senior leadership with the local issues. He complimented all BJP leaders for their active participation in the meeting and said that district leaders are focused at the cementing of grass root level structure of the organization in the region.
State Executive Member, Gopal Mahajan and district general secretary (Org.), Inderjit also accompanied the State general secretary (Org.) during the meetings.