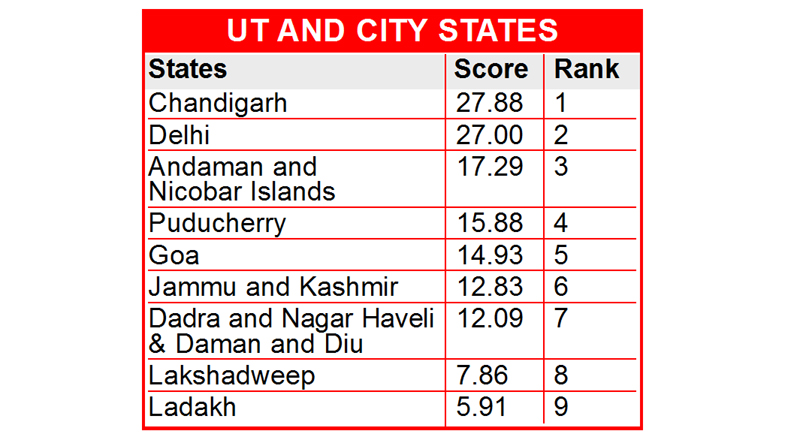 JAMMU, July 21: Jammu and Kashmir stood at sixth place and Ladakh at bottom in UT and City States category in NITI Aayog’s third India Innovation Index released today in New Delhi.
The Union Territories of Jammu and Kashmir and Ladakh were clubbed with seven UT and City States for determining ranking.
J&K finished behind Chandigarh, which topped in UT and City States category, Delhi, Andaman and Nicobar Islands, Puducherry and Goa while the UT of Ladakh was at bottom even behind Dadra and Nagar Haveli and Daman and Diu and Lakshadweep.
States and Union Territories were divided into ’17 Major States’, ’10 North-East and Hill States’, and ‘9 Union Territories and City States’, for effectively comparing their performance. J&K and Ladakh were clubbed in third category.
NITI Aayog’s India Innovation Index 2021 examines innovation capacities and ecosystems at the sub-national level.
The index, released by NITI Aayog’s Vice Chairman Suman Bery in the presence of Chief Executive Officer Parameswaran Iyer today, has been developed on the lines of the Global Innovation Index.
The overall index score was 14.56. However, the average innovation score of the 9 Union Territories and City States was 15.74, higher than the national average.
Jammu and Kashmir scored 12.83 and ranked sixth while Ladakh got 5.91 and figured at bottom.
On Jammu and Kashmir, the NITI Aayog commented that J&K has Start-Up Policy 2018 but along with Puducherry needs to pedal faster to match the growth of other UTs and not let their climatic or geographical factors hamper their growth.
Jammu and Kashmir has 0.478 Efficiency Ratio and Rs 85219 GSDP per Capital (2019-20).
J&K scored 20 out of 70 in Innovation, 30 in Enablers, 40 in Human Capital, 10 in Investment, 15 in Knowledge Workers, 40 in Business Environment, 65 in Safety and Legal Environment, 15 in Performers, 25 in Knowledge Output and 10 in Knowledge Diffusion.
In Enablers category, J&K slipped to seventh place even behind Dadra and Nagar Haveli and Daman and Diu while Ladakh remained at bottom. In Performers category, J&K was at sixth place.
In UT and City States category, Chandigarh topped the Knowledge Worker Pillar while ensuring investment in school and higher education. Delhi topped the business environment and investment pillar with a large number of incubator centres, a skilled labour force and its continuously transforming Start-Up ecosystem.
Ladakh and Lakshadweep occupy the last positions with 5.91 and 7.86 scores respectively. The NITI Aayog said they have consistently performed low on all the pillars due to geographical shortcomings and economic constraints, which require immediate attention to promote an innovative environment. Moreover, Ladakh became UT nearly three years back only.
The NITI Aayog report, however, said Lakshadweep, Ladakh and Puducherry were the best performers in the pupil-teacher ratio in schools and in higher educational institutions. But at the same time, UT of Ladakh has consistently underperformed in various indicators on the Human Capital Pillar.
“Ladakh has lower population, so, it would be better to invest in human capital development by promoting quality educational institutions, enrolment in engineering and technological universities and vocational education courses,” the NITI Aayog report said.
Meanwhile, Karnataka, Telangana and Haryana have been ranked as the top three States among 17 major States in NITI Aayog’s third innovation index.
Chhattisgarh, Odisha and Bihar have been ranked at the bottom of the index among major States. Karnataka topped the index for the third year in a row.
Among Union Territories, Chandigarh topped the chart, while in the North-East and Hill States category, Manipur occupied the top spot.
Speaking at the event, NITI Aayog CEO Parameswaran Iyer said he would like to reaffirm the Aayog’s continued commitment to monitoring the state of innovation in India through the India Innovation Index.
“We strive to improve the innovation ecosystem across the nation in partnership with states and other stakeholders,” he said.
NITI Aayog member V K Saraswat said innovation is the key to sustainable and inclusive growth.
“It can help us solve the biggest challenges of our times, bringing millions out of poverty, generating livelihood opportunities, and paving the way for an Aatmanirbhar Bharat,” he added.
The first and second editions of India Innovation Index were launched in October 2019 and January 2021, respectively. According to an official statement, the third edition strengthens the scope of innovation analysis in the country by drawing on the framework of the Global Innovation Index (GII).
The new framework presents a more nuanced and comprehensive outlook for measuring innovation performance in India, with the introduction of 66 unique indicators, as compared to the 36 indicators used in the previous edition (India Innovation Index 2020), it added.
The report noted that the pandemic-induced lockdowns impacted 311 million students.
“In the absence of physical schooling, remote learning was actively introduced across the country… The number of internet users in the country subsequently rose to 83.37 crore in June 2021,” it said.
The index also pointed out that India’s urban population increased from 222 million (26 per cent of the total population) in 1990 to 440 million (32 per cent) in 2014 and it is projected to reach 814 million (50 per cent) by 2050.