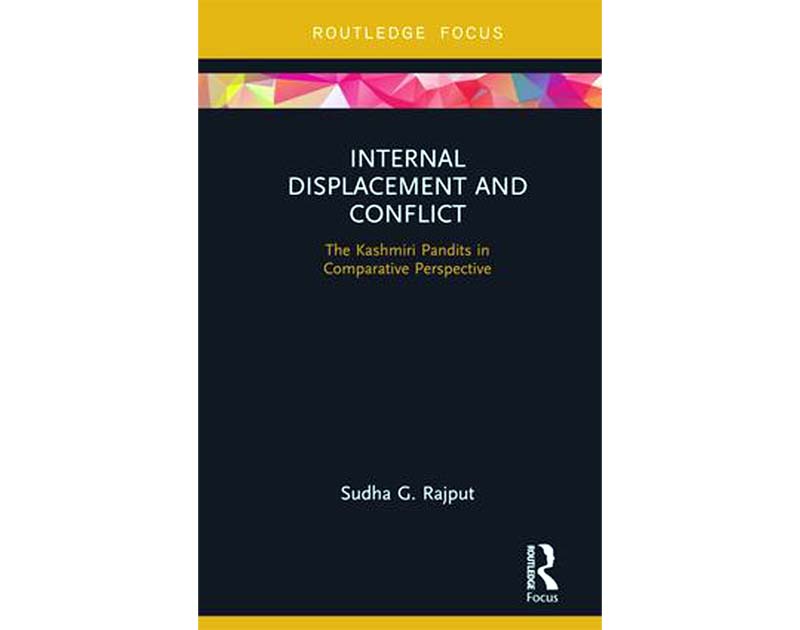 JAMMU, June 11: Based on doctoral research on displacement of Kashmiri Pandits, Toutledge (Oxford) has published a book titled “Internal Displacement and Conflict: The Kashmiri Pandits in Comparative Perspective”, authored by Sudha G Rajput, a Professor at George Washington University, Washington DC.
Grounded in multidisciplinary research, this book presents a methodical understanding of those displaced within their national borders, the Internally Displaced Persons (IDPs).
This book helps answer the most perplexing questions surrounding conflict-induced protracted displacements: namely, how do positions embraced by key actors inform/influence IDP policies, and why, despite the promise of robust return packages, do families remain reluctant to return to home communities and equally reluctant to embrace new host communities? Capitalizing on the diagnostic tool kit known as Dugan’s Nested Model, uniquely adapted to the Kashmiri Pandit displacement, this book also analyzes issues of the similarly displaced communities of Nagorno-Karabakh, Abkhazia and South Ossetia, Kosovo, and Darfur regions.
This book will be of much interest to students of peace and conflict studies, humanitarianism, Asian politics, and International Law in general.
Section I of the books deals with global phenomenon of internal displacement, Kashmiri Pandits, research challenges and family legacies. In Section II, there is methodical analysis of Kashmiri Pandit challenges besides moral and political dilemma of return while the Section III deals with policies, assessment, positions, and complexity of policymaking.
Section IV delves understanding Kashmiri Pandit displacement through a comparative lens and journeying into Azerbaijan, Georgia, Serbia, and Sudan while Section V elaborates on findings, best practices, and moving forward.
Pertinent to mention that the IDP phenomenon remains less understood than that of refugees due to the “internal” nature of the crisis, linked to a nation’s sovereignty, which assigns the responsibility for care to the national actors as opposed to an international body. However, the IDP phenomenon poses an international humanitarian challenge, with upwards of 40 million people currently in internal displacement across the globe.
Sudha G Rajput is Adjunct Professor at the School for Conflict Analysis and Resolution, George Mason University, Virginia, USA.