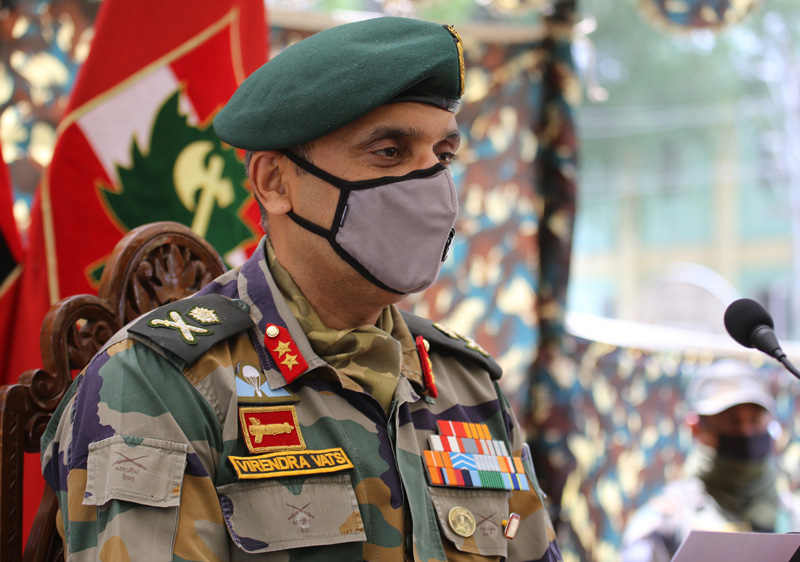 Srinagar, July 11: Army today said that there is heightened alert in North Kashmir to foil a possible militant strike while Army foiled a major infiltration attempt along the Line of Control (LoC) and killed two infiltrators.
General Officer Commanding (GOC) of Baramulla based Army’s 19 Infantry Division Major General Virender Vats today said that a major infiltration bid was foiled in Nowgam sector of Kupwara district in which two militants were killed. “Rs 1.5 lakh Indian and Pakistani currency and arms and ammunition were recovered from them”, he said.

Click here to watch video
He said that in this morning’s operation at Nowgam sector two heavily armed militants were killed along the Line of Control in Nowgam sector. He said appropriate response by troops on ground was taken against the militants who were trying to infiltrate in the area by cutting the anti-infiltration fence and were dressed in combat fatigues.
“The timely action ensured the killing of two heavily armed militants and in addition to the food and medicines we have recovered around 1.5 lakh Indian and Pakistani currency from them and search operations are still underway to sanitize the area”, the GOC said.
“They had taken the route through Pakistani posts in the area opposite which clearly indicates that Pakistan is pushing militants in India”, he said.
The GOC said that ever since India announced the August 5, 2019 decision, Pakistan is trying hard to push more and more militants into the Valley, an attempt to instigate the people which they have failed to do for long now.
“Launch pads across the LOC are fully occupied by militants and as per our estimates some 250 to 300 militants are ready to infiltrate,” Major General Vats said.
He said that this infiltration attempt follows similar attempts made in Rajouri and Kupwara sectors in recent past and needs to be seen in backdrop of various inputs about presence of militants on launch pads across the LoC, fully facilitated and supported by Pakistani army.
“Indian Army remains fully committed to maintain the sanctity of the LoC and any trance movement will get similar or appropriate response,” he said.
The GOC said that the infiltration attempts may go up in coming months. “In the coming three to four months, infiltration may go up and troops are alert to foil all such bids”, he added.
The officer said that the two militants were intending to carry out a particular strike in Kashmir. “We have received inputs about militant attack in North Kashmir and an alert is being maintained to foil any such bid”, he added.
On militancy status in North Kashmir, the GOC said that North Kashmir has quite different dynamics than that of South Kashmir, as the people here have largely “discarded the militancy narrative” and the militants have not got any sort of attraction is all because the people have rejected it.