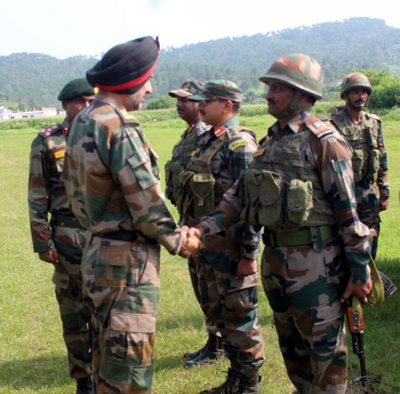 Excelsior Correspondent
JAMMU, Aug 16: Director General of Military Operations (DGMO) Lt Gen Anil Chouhan today told his Pakistani counterpart that infiltration attempts by the terrorists were a major cause of concern saying these activities have increased in the areas of North of Pir Panjal mountain ranges.
Lt Gen Chouhan made his stand clear during the DGMO level talks between India and Pakistan today, which were initiated at the behest of latter.
“The Indian DGMO emphatically stated that infiltration attempts were a major cause of concern. He also informed the Pakistan DGMO that these activities have increased in the areas of North of Pir Panjal mountain ranges. Pakistan must institute measures to prevent infiltration from the launch pads located on its side of the Line of Control (LoC),’’ official sources said.
They said the Pakistani DGMO gave an assurance that Pakistan army would take prompt action against move of inimical elements in proximity to the LoC and respond to information shared by the Indian side thereby facilitating conduct of anti-terrorist operations.
The Pakistani DGMO expressed satisfaction over the measures being taken along LoC by troops to maintain peace and tranquility. The quantum of ceasefire violations has drastically reduced and augurs well for the future, he said.
Meanwhile, Army yesterday thwarted an infiltration attempt on the Line of Control (LoC) in Nowshera sector of Rajouri while Northern Command chief Lt Gen Ranbir Singh today visited forward areas of the district to review security situation.
Official sources said alert Army troops noticed movement along the LoC in Nowshera sector at 5.15 am yesterday morning and challenged the militants, who were trying to infiltrate into the Indian territory. When challenged, the armed intruders opened firing on the Army, who retaliated, leading to exchange of gunbattle.
Pakistan army posts, in a bid to facilitate the infiltration attempt, also opened firing to give cover to the intruders. In the ensuing firefight, an Army personnel sustained injuries and was evacuated for further medical treatment to the Military Hospital. His condition is stated to be stable.
Immediately after the infiltration attempt, Army launched massive search operation along the LoC in Nowshera sector to ensure that the militants don’t manage to enter into this side. However, no traces of militants were observed.
“Pakistan continued its nefarious designs of supporting and abetting infiltration across the LoC. It is clear that Pakistan has never been interested to bring peace and stability in Jammu and Kashmir. They have been vitiating the atmosphere both along LoC and hinterland,” a Defence spokesman commented after the intrusion bid.
He said the White Knight Corps is keeping strict and constant vigil across the LoC and security forces are prepared to thwart any nefarious designs of Pakistan sponsored terrorists.
Police also conducted searches in Nowshera sector.
Meanwhile, a joint team of Army and police recovered three mines, three Improvised Explosive Devices (IEDs), three RPGs, three boosters, one Under Barrel Grenade Launcher (UBGL), 13 detonators and some tablets from forward village of Sarya in Bhawani area of Nowshera sector. Police party in the operation was headed by Incharge Police Post Bhawani, Ashish Choudhary.
Meanwhile, Lt Gen Ranbir Singh, Army Commander, Northern Command, accompanied by White Knight Corps Commander, Lt Gen Saranjeet Singh visited forward areas of Rajouri sector today to review operational preparedness and the prevailing security situation in forward areas.
During the visit, the Army Commander was briefed by the Commanders on ground about current operational and prevailing security situation and preparedness of the Formations in dealing with the same.
The Army Commander also interacted with the soldiers and complimented them for their dedication to duty and high standard of professionalism. He appreciated the measures and standard operating procedures instituted by the units and formations in their area of responsibility.
The Army Commander stressed the need to be prepared for effectively meeting emerging security challenges. He exhorted all ranks on the need to remain vigilant to counter the nefarious designs of the inimical and anti- national elements.
He was also updated by the White Knight Corps Commander on current security situation and operations conducted in the recent past.