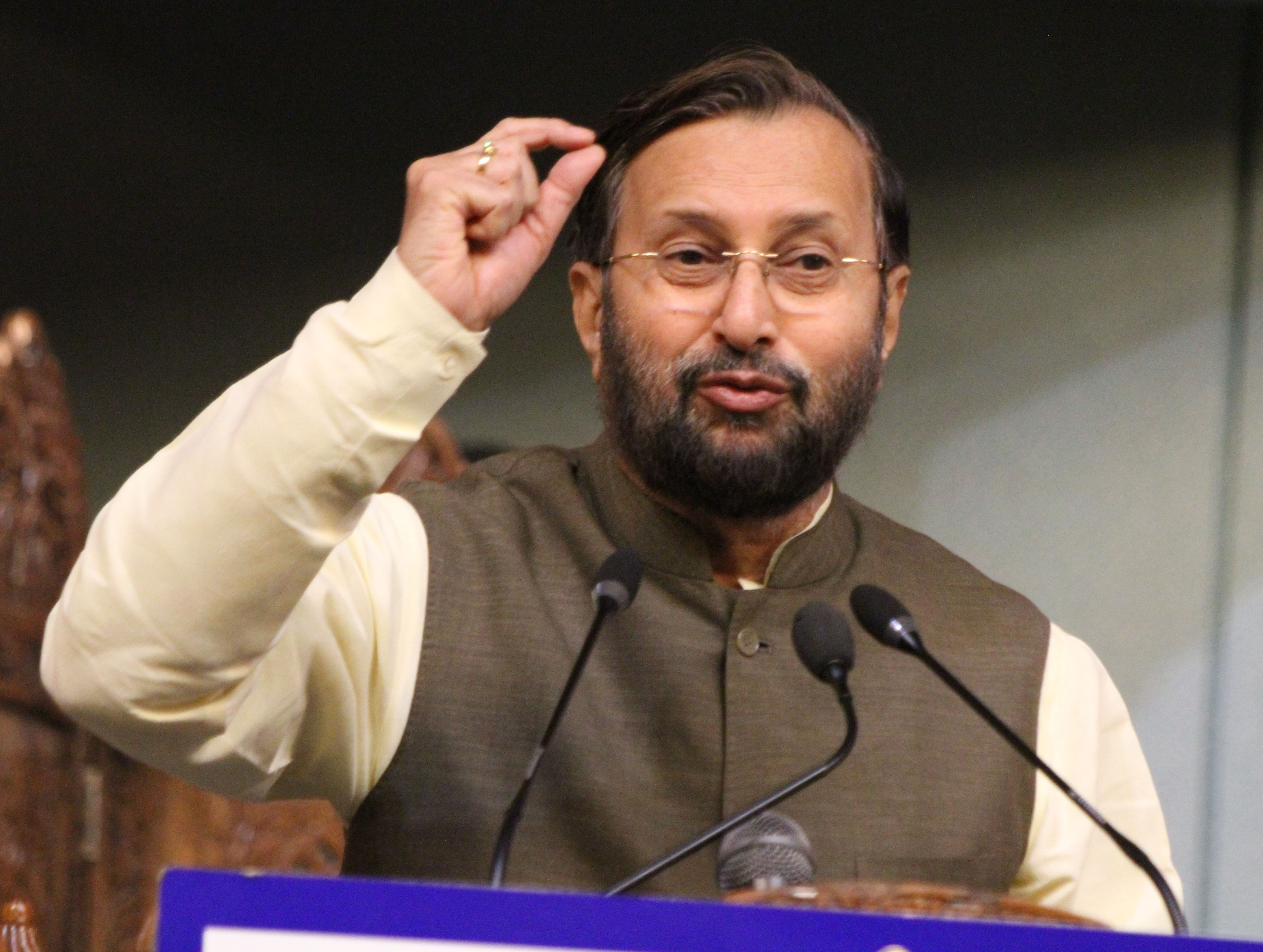 Dogri on DD will reinforce self esteem: Dr Jitendra

Excelsior Correspondent
Srinagar, June 22: Union Minister for Information and Broadcasting Prakash Javadekar today said India will soon become the largest country in the world where every household owns a television set.
“There is a new dream that every household will have a TV in the coming years. There are 25 crore households in India and 18 crore have a TV sets. There are still seven crore households without TV,” Javadekar said here while addressing a function to launch distribution of free Dish TV set top boxes in Kashmir, besides unveiling the signature tune of Doordarshan’s satellite channel for Jammu and Kashmir DD Kashir.
Javadekar also lauched the the first news bulletin in Dogri that will be aired on DD Kashir on daily basis from this evening. “Today, we are making a small beginning in which we are giving set top boxes of free Dish TV for people living in far flung areas and poor people. However, as soon as our economy develops people will buy a TV as soon as they are able to address the six basic needs of food, clothing, shelter, healthcare, education and livelihood,” the Minister said.

He said in near future, India will be the largest nation with TV in every household. “This is my belief. Television has seen massive expansion over the past three decades with Doordarshan being the only channel in 1970s to mushrooming of channels in late 1990s.Today we have more than 700 TV channels in different channels on various fields. There was revolution in this field after private channels come in 1992-93,” he said.
The Minister gave credit for the spread of TV across the country to the introduction of cable TV. “The cable connected one home to another, then one locality to the next, and it ended up connecting the people as well. Even today, there are nine crore households where cable TV is watched,” he said.
He said the cable spread was fast and due to the fact that there was no interference of the Government in it. “People used to say, and which to an extent is true, that cable spread and it became a cable revolution not despite Government but because the Government was not there,” he added.
The Minister expressed happiness that nearly nine crore people were accessing TV content through DTH services. “There are five to six major operators and they put together have 5.5 crore connections. The biggest DTH operator in the country is Doordarshan with 3.5 crore DTH connections where we are giving free Dish,” he said.
Hailing the introduction of Dogri language telecast, including a Dogri news bulletin, on Doordarshan satellite channel from today, Union MoS in PMO Dr Jitendra Singh said “Dogri on Doordarshan satellite channel will reinforce self – esteem of all those who take pride in speaking and communicating in this language”.
Addressing the gathering after he formally launched an exclusive Dogri language slot on Doordarshan Kashir channel at a function presided over by Governor Satya Pal Malik and attended by Union Information & Broadcasting Minister Prakash Javadekar, Dr Jitendra Singh, who was the guest of honour said, it was a long- standing demand to have a telecast of Dogri programmes on Doordarshan satellite channel and appreciated the I&B authorities for having promptly worked on it when it was brought to their notice, soon after the Modi Government began its second term after the election . He hoped that today’s breakthrough will pave the way for longer duration Dogri programmes on Doordarshan dish channels and finally for an exclusive 24 hour Dogri channel on Doordarshan.
Dr Jitendra Singh said, for any language to grow and prosper, there are two basic prerequisites, firstly the esteem of speaking the language and secondly, the quality of literature in that language. He regretted having come across children of some of the renowned Dogri language writers and connoisseurs, who prefer to converse in English or Hindi, instead of Dogri. Regional languages like Bangla and Tamil have prospered because these are the natural languages for every child hailing from these communities, he added.
In the context of Jammu & Kashmir, Dr Jitendra Singh said, side by side telecast of Dogri, Kashmiri and Ladakhi on the Doordarshan satellite channel will help reinforce the composite culture that the State is known for. Dogri can certainly step in as a language of “love” to erase out the bitter narrative of hostility witnessed in recent years, he added.
Dr Jitendra Singh also thanked Union I&B Minister Prakash Javadekar for arranging free distribution of DD Dish Set Top Boxes to those who can not afford the same. This is going to be a special boon, he said, especially for those living in border areas who are exposed to poisonous propaganda from Pakistan and are unable to access Doordarshan because of lack of resources.
He said, he had requested Javadekar to issue directions for distributing free Dish Boxes , on priority, to people living along International Border (IB).