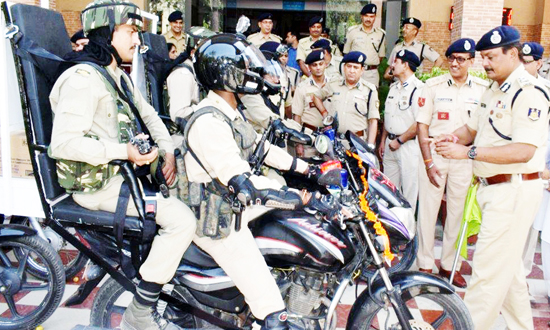 Excelsior Correspondent
JAMMU, June 25: To review the efficacy of security arrangement for Shri Amarnath Yatra, Abhay Vir Chauhan IG CRPF Jammu Sector chaired a meeting of senior CRPF officers of Units deployed in Jammu region here at Sector Headquarters Bantalab, here.
During the meeting, various aspects of the security were discussed upon among which security of Base Camp Bhagwati Nagar and security of Yatra route were emphasized.
Chauhan also emphasized upon the necessity of optimum utilization of Radio Frequency Identification (RFID) on Yatra vehicles.
He also directed the officials to fulfill the responsibilities entrusted to them with utmost sincerity so as to ensure smooth conduct of Yatra.
Chauhan also reviewed the composition and preparedness of Special Motor Cycle Squad formed by CRPF for the Yatra.
It is pertinent to mention here that keeping in view the convenience and security of pilgrims, CRPF has prepared a Special Motor Cycle Squad which on one hand will ensure security of pilgrims on the Yatra route and on the other hand it will also be utilized as a small ambulance for pilgrims.
In some of the motorcycles of the squad, various life-saving equipments have been fixed which can suffice to carry one person at a time.
Among other who attended the meeting were Mool Chand Panwar, DIGP, GC CRPF, Hiranagar, SLC Khup, DIGP, CRPF, Hiranagar Range, Nitu, DIGP, CRPF, Jammu Range, MP Bahuguna, DIGP, CRPF, Jammu Sector Headquarters, Joginder Singh, DIGP, CRPF, Jammu Sector Headquarters, SP Singh, DIGP, GC CRPF Bantalab and other senior officers of CRPF.