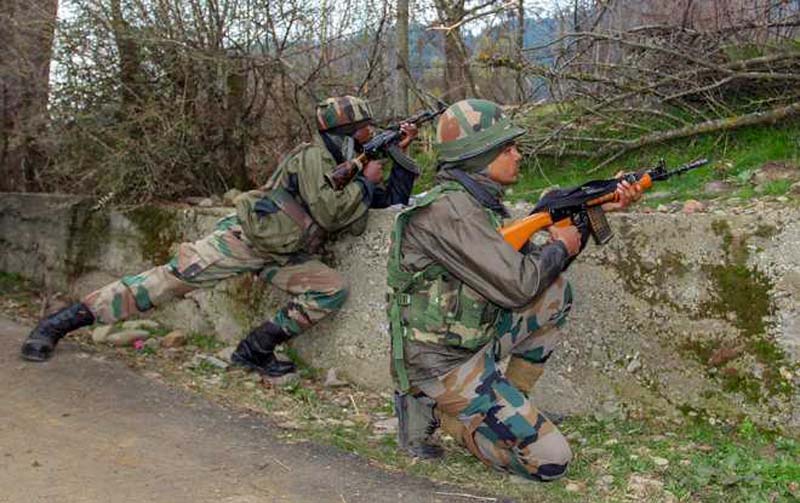 Excelsior Correspondent
SRINAGAR, July 5: A militant was killed in a gun battle that broke out in the orchards of Narwani area of South Kashmir’s Shopian district this morning while two militants managed to flee.
A joint team of Army’s 44 RR and SOG launched a cordon and search operation in Narwan after inputs about presence of militants in the village.
During the search operation, the hiding militants fired on the search party which was retaliated by the troops leading to a gun battle in which one militant was killed. He has been identified as Sameer Ahmad Seh of Sugan, Shopian.

Click here to watch video
Two militants, however, managed to escape from the cordon under the cover of heavy volley of bullets. The troops also busted a hideout in the orchards where the militants were taking shelter. War like stores were recovered from the hideout.
A police spokesman said that as per police records, the killed militant was affiliated with Al-Badar and had recently joined Hizbul Mujahideen. “He was wanted by law for his complicity in a series of terror crimes including attack on security establishments and civilian atrocities”, he added.
“According to the police records, Sameer had history of terror crime cases and was part of groups involved in planning & executing terror attacks in the area”, he added.
The spokesman further said: “As per the records available with police, several terror crime cases were registered against him including Case FIR No.62/2018 of P/S Zainapora pertaining to killing of a civilian at Zainapora Shopian, Case FIR No. 65/2018 of P/S Zainapora regarding killing of 4 police personnel at Guard Post in Zainapora, Case FIR No. 52/2018 of P/S Zainapora on explosion at Heff Shirmal Shopian, Case FIR No. 283/2018 of P/S Shopian pertaining to abduction & atrocities on a civilian, Case FIR No. 08/2019 of P/S Zainapora regarding to killing of a civilian at Draggad Shopian and Case FIR No. 12/2019 of P/S Zainapora about to recovery of arms & ammunition from Zainapora, Shopian”.
The spokesman said that incriminating material including arms and ammunition were recovered from the site of encounter. “All these materials have been taken into case records for further investigation and to probe their complicity in other terror crimes”, the spokesman added.
A group of youth gathered at the gun battle site and pelted stones on the troops who were conducting the operation. Security forces fired tear smoke and pellets to disperse them. Three youth received pellet injuries and were taken to hospital for treatment.
The internet services were snapped in South Kashmir to prevent any violence.