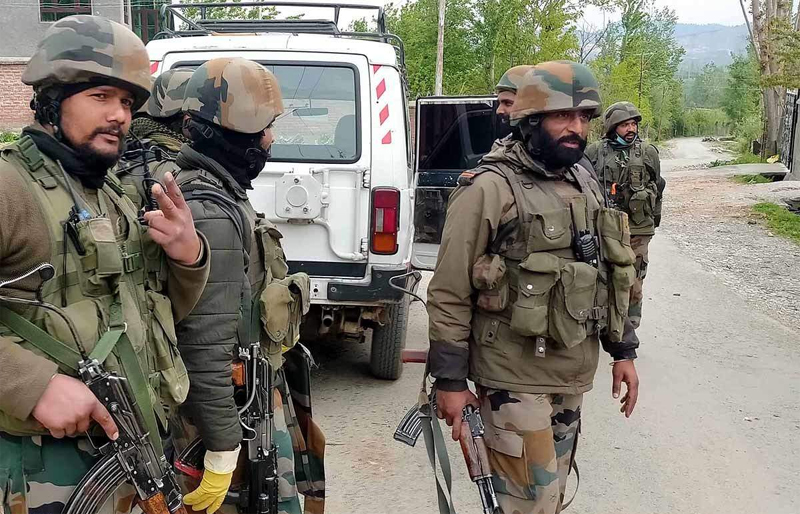 SRINAGAR, June 29: Three militants including the lone surviving militant commander from Doda district of Jammu were killed in an encounter in Shangus belt of South Kashmir’s Anantnag district this morning.
Inspector General of Police Kashmir, Vijay Kumar, said that with the killing of a militant from Doda district of Jammu region, Doda district is militancy free now.
Kumar said that a joint team of Police, Army’s 19 Rashtriya Rifles and paramilitary CRPF launched a cordon-and-search-operation in Runipora Khull Khulchohar area of the South Kashmir district early this morning.
As the joint team encircled the suspected spot, the hiding militants fired upon them. The fire was retaliated, triggering off an encounter in which three militants were killed.
Kumar said that among three killed militants one was district commander of Hizbul-Mujahideen for Doda district. “With his killing Doda district is now militancy free”, he added.
He has been identified as commander Masood Ahmad of Doda district. The other two militants have been identified as Nadeem Dar of Sunigam Kulgam who had joined militancy 15 days ago and Tariq Ahmad Khan of Lal Chowk Anantnag who had joined LeT in July 2018.
Masood was last surviving militant from Doda district of Jammu region, who had shifted his base from Doda to Srinagar.
A police spokesman said that the Doda militant has been identified as Masood Ahmed, who was involved in a rape case and was absconding ever since. He had later joined Hizbul Mujahideen and was operating in south Kashmir as one of the commanders of the outfit. “There is no active terrorist in Doda district of Jammu region now,” he said.
The bodies of slain militants were sent to Handwara for last rites after collection of their DNA. “In case any family claims the slain militants to be their kith or kin, they can come forward for identification and also take part in the last rites,” he said in a statement.
“With the killing of three militants today, the total number of militants killed this year in Kashmir has reached 116. Today’s encounter was 13th in a row in South Kashmir in the month of June in which so far 36 militants have been killed”, Kumar said.
The IGP said that militants fired an Under barrel Grenade Launcher (UBGL) at Army Camp at Chittergam area of Central Kashmir’s Budgam district today.
The UBGL grenade was fired on Army’s 50 RR camp at Chhitergam. However, it fell outside camp at a brick kiln. “No loss of life or injury was reported. Soon after the attack whole area has been cordoned off by the forces to nab the attackers”, Kumar said.
And police in Bandipora district of North Kashmir today prevented three youth from joining militancy.
A police official said that they have prevented three youth from joining militancy by counseling, guidance and support and welcome them to the path of peace, progress and success.
The youth were taken to Police Station where they were properly counselled in presence of their family members following which they were handed over to their families.