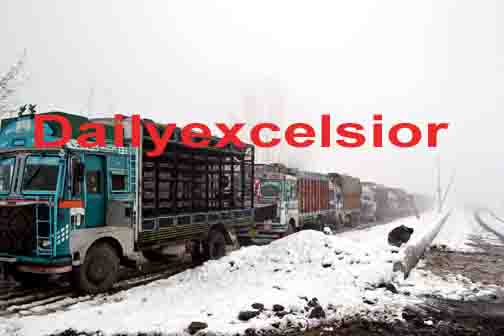 SRINAGAR: The national highway, connecting the Ladakh region with the Kashmir valley, was closed due to heavy snowfall since last evening.

However, barring two trucks, all vehicles trapped on the road have  been cleared. Drivers and conductors of the trucks, stranded at Ranga Mode, about eight km from Sonmarg, were rescued and brought to safer place, officials said.

They said there was moderate to heavy snowfall at Sonmarg, Zojila pass, Ranga Mode, Meenmarg and India Gate on the highway, forcing authorities to suspend traffic from both ways.     It was snowing heavily at several places, including Zojila pass, they said.

He said large number of vehicles, including those carrying passengers, left Drass, the second coldest places in the world after Siberia and other parts of the Ladakh region yesterday for Kashmir despite light snow and rain.

No vehicle was stranded on the highway at any place now. they said.     If there is no immediate improvement in the weather conditions, the highway could be declared closed for six winter months, the officials said, adding the road becomes slippery due to below freezing temperature. Since there is heavy snowfall, it will not be possible to allow traffic on slippery conditions to avoid any accident.     Zojila pass also received heavy snowfall making it almost impossible to put through the highway again this year.

The Centre and state government have already announced to construct a tunnel at Zojila to make it an all weather road, which is strategically important.     In the past, the highway was being closed from November 1 every year for winter months. However, for the past few years the road remained open till weather permits. (AGENCIES)