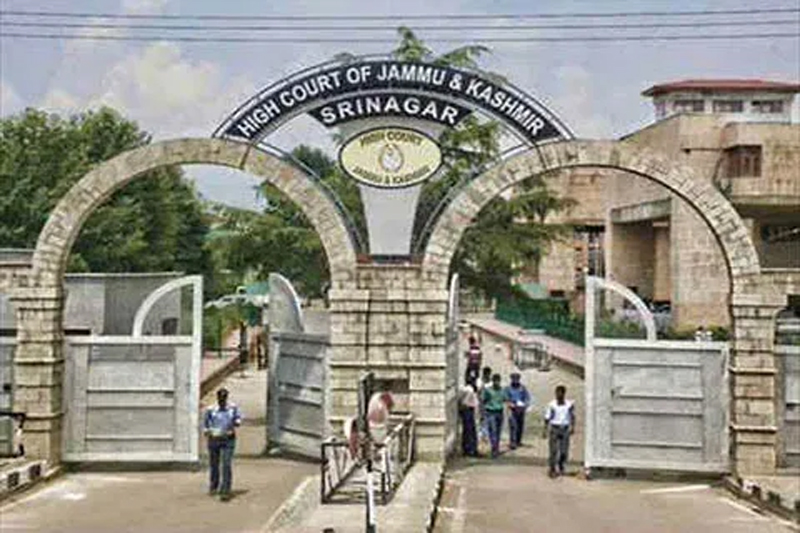 Excelsior Correspondent
SRINAGAR, Feb 13: The High Court today sought status report from the Government on the plea alleging malpractice by Revenue officials in mutating the property without any valid document and also asked for latest status on digitization of revenue records.
Hearing a PIL filed by NGO J&K People’s Forum Secretary M M Shuja through his counsel Shafakat Nazir seeking direction on Government through Commissioner/ Secretary to Government Revenue Department, Financial Commissioner Revenue J&K, Srinagar and Divisional Commissioner Kashmir to place the entire details of mutation in all Pathwar Halqas of the J&K UT without any valid registered document, the Division Bench of Justice Ali Mohammad Magrey and Justice D S Thakur asked the Government counsel for filing of response to the contentions raised in the plea.
During the course of proceedings, the Government counsel B A Dar (Sr AAG) informed the court that the PIL is not maintainable as the Government of J&K has already taken the decision for digitizing of revenue records. Court asked the counsel to file the status report as also the process of digitization undertaken by the Government on next date.
Petitioner organization is aggrieved of various malpractices in vogue in the Revenue Department more particularly about attestation of mutations, maintenance of records and non-adherence of the provisions of law including the transfer of title of immoveable property in violation of section 138 of J&K Transfer of property Act, non compliance of the provisions contained in Land Revenue Act, non digitization of the revenue record in J&K and Registration of Deeds/ Documents by Public Notaries not empowered to register the same relating to transfer of immoveable property.
It is further prayed that upon submission of the details of mutation and after judicial scrutiny thereof, any mutation or transfer of title by any mode other than that prescribed by law be declared non valid under the eyes of law.
It has been submitted that Transfer of Property Act forbids transfer of title of any immoveable property if such transfer is not supported by an instrument registered legally by the registering authority prescribed by the Registration Act.
“That on ground most of the patwaries , girdawars and even Naib Tehsildars have created their own separate kingdom in their respective jurisdictions and consider themselves about every law and rule, with the result that not only public at large suffers but also a considerable loss is caused to the State exchequer”, read the PIL.
It has been also noticed that to avoid payment of stamp duty on account of execution of valid instrument of alienation of immovable properties by one person to the other, most of the patwaries have carved out a novel and illegal mechanism by recording and attesting even pre-dated mutation without following the prescribed procedure and the law laid down in section 138 of J&K Transfer of property Act, the PIL said.