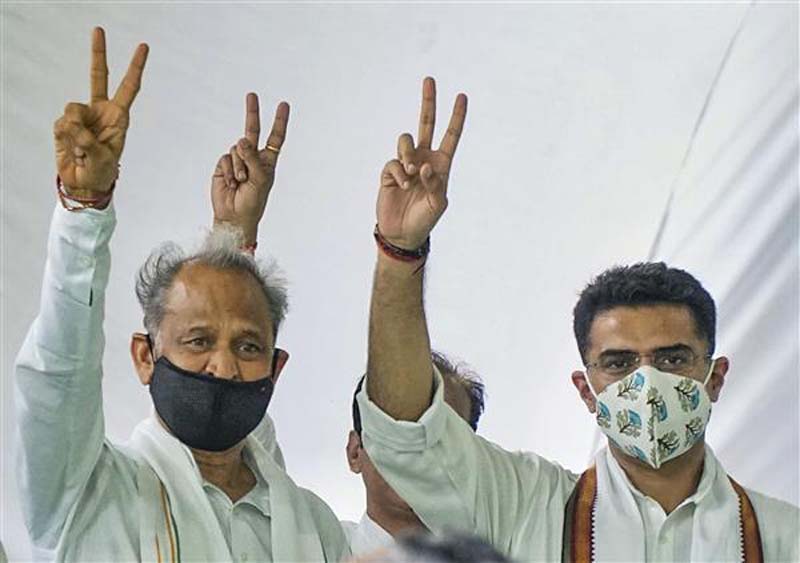 JAIPUR, Aug 13: Sachin Pilot shook hands today with Chief Minister Ashok Gehlot, the image marking the patch-up between the two party factions in the State ahead of the Assembly session where the Congress Government is set to face a floor test.
The BJP said after a legislature party meeting that it will move a no-confidence motion against the Gehlot Government in the session which begins tomorrow. Hours later, the Congress Legislature Party (CLP) met and announced that it would seek a confidence vote to prove its majority.
With the disgruntled MLAs led by Pilot back in the party-fold following the intervention of the top leadership, the Congress is likely to pass the floor test.
In a House of 200, the party has 107 MLAs and the support of Independents and allies. The BJP has 72 members.
When Pilot got down from his car at the Chief Minister’s residence, he was received by Govind Singh Dotasra, who has replaced him as the party’s State unit president.
Pilot was also sacked as the State’s Deputy Chief Minister and Gehlot referred to him as “useless”, using the Hindi term “nikamma”.
The fault line persisted even after the party high command welcomed Pilot back, promising that a committee will look into his grievances.
MLAs loyal to Gehlot, still camping together at a hotel, expressed dissatisfaction with the dissidents’ return. But the Chief Minister has urged them to “forgive and forget”, and move on.
The truce – at least for now – was reflected in the meeting between Gehlot and Pilot at the chief minister’s residence, ahead of the CLP meeting.
Party leaders K C Venugopal, Avinash Pande, Randeep Surjewala and Ajay Maken had travelled from New Delhi to Jaipur for the MLAs meeting, and the first face-to-face interaction between Gehlot and Pilot after the month-long crisis.
Govind Singh Dotasra was also there as the two leaders shook hands, and then all of them posed together for the cameras.
The party had put out a similar picture following the reconciliation between the two after the 2018 assembly polls, when Gehlot was picked by the party for Chief Minister’s post and Pilot settled agreed to be his deputy.
The CLP meeting was also attended by the 18 MLAs who had revolted along with Sachin Pilot, a party leader said.
“Everything went on well. Now the Congress is united,” AICC general secretary K C Venugopal told reporters after the meeting. He added that the MLAs will fight the BJP’s politics unitedly.(PTI)