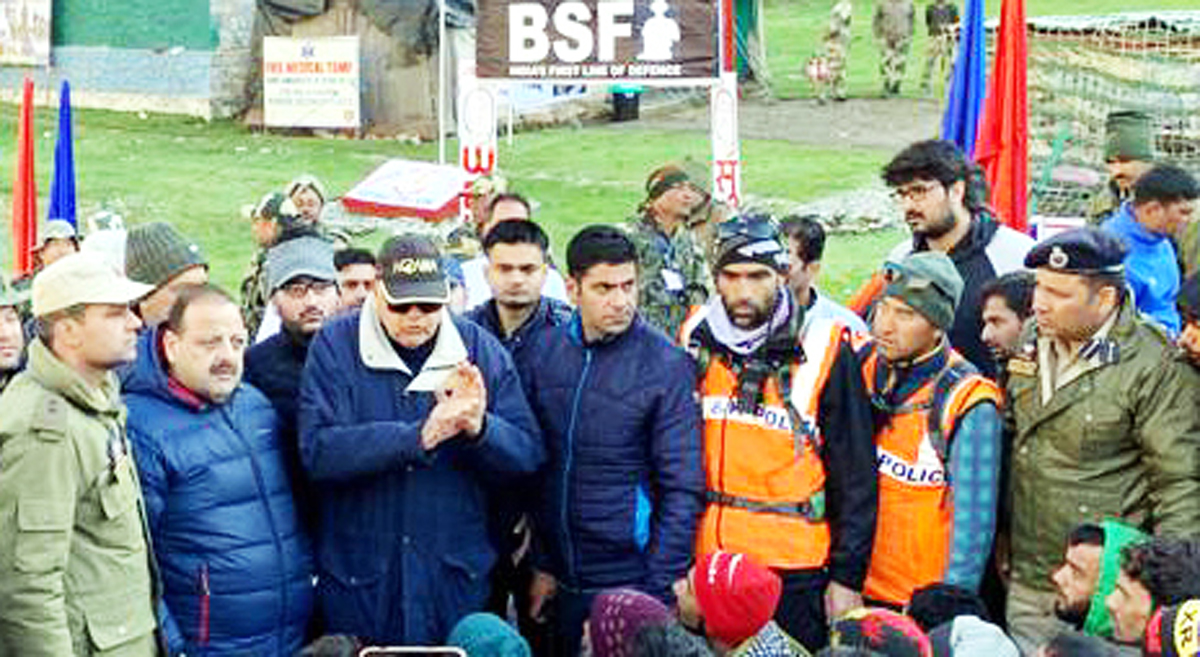 Excelsior Correspondent
BALTAL, July 2: Jammu and Kashmir National Conference President and Member Parliament Srinagar Dr. Farooq Abdullah today visited Baltal, the base camp of Shri Amarnath Ji Yatra and Panjtarni on the Kashmir Himalayas and took stock of arrangements made for the pilgrims thronging from across the country.
Dr. Farooq Abdullah, accompanied by Provincial President Jammu Devender Singh Rana, was briefed about the facilities created for the smooth conduct of the pilgrimage at various points on track besides base camps of Pahalgam and Baltal.
Interacting with yatris at both Panjtarni and Baltal, Dr. Abdullah described Amarnath Ji Yatra as a shining symbol of Kashmir’s glorious secular ethos and its unique spirit of unity in diversity. He said that people of Kashmir have all along demonstrated high degree of hospitality from times immemorial for the successful conduct of this ancient pilgrimage.
Praying for peace and tranquility in the State and the Country, Dr. Abdullah hoped that the pilgrims will return back their homes as ambassadors of harmony and amity, the corner- stone of Kashmir’s heritage. He wished pilgrims successful and blissful yatra. He exuded confidence that their stay in the valley will be memorable.
At various yatra points, the pilgrims gave account of their journey up to the base camps and expressed satisfaction over the arrangements made by the authorities.They also gave suggestions for making further improvements in the arrangements.
Dr. Abdullah urged Shri Amarnath Ji Shrine Board and the State Government for ensuring all comforts in terms of boarding, lodging and other logistics for the pilgrims. He called for synergized efforts by various agencies in streamlining and making the yatra successful.
Later, Devender Singh Rana visited the holy cave shrine and paid obeisance at the sanctum sanctorum. He prayed for universal brotherhood, peace and tranquility in the State and the country.