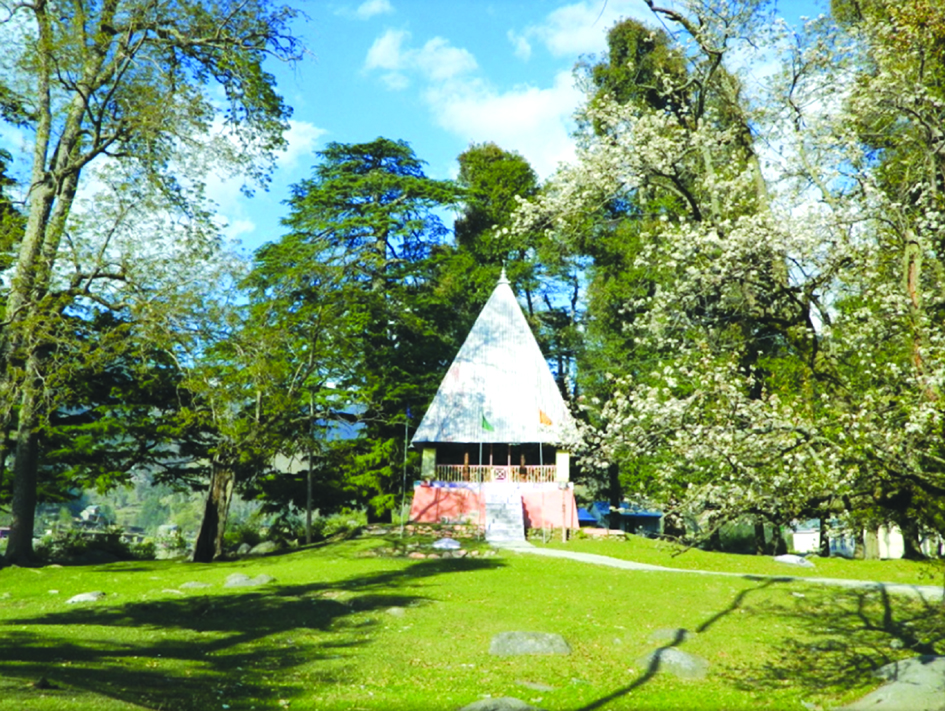 For those who feel like trudging a lonely track or standing atop a mountain pass, wish to get lost in wilderness; feel a strong wanderlust as if the mountains are calling or if they wish to be one with the nature, frolicking in a icy stream; picking a rod to challenge a trout then Dudu valley nestled in Seoj Dhar range is a perfect getaway from the glamour and glitz of the city.

To reach Dudu valley, one has to take a turn for Shiv Gali a mountain pass at Triunglian which is just eight kilometers prior to Basantgarh on Ramnagar-Basantgarh road.  A steep ascent till Shiv Gali is rewarded by a breathtaking view of the Dudu valley, with thick pine forests on mountain slopes and snow clad mountains to the north.  The geographical significance of the Shiv Gali is that it is right on the edge of two great watersheds – one sloping toward Ujj river basin flowing through Basantgarh and secondly sloping towards Tawi river basin of the Dudu valley. Two temples at Shiv Gali add spiritual dimension to the mountain pass.  A tourist Sarai is coming up at Shiv Gali which already has a view-point with  a panoramic view of the two valleys and adjoining Dhars covered with conifers.
A mountain meadow close to the view point offers camping ground with unparalleled view.  The mountain pass remains snow bound during winters and people have to take a circuitious  route from Basantgarh to Udhampur to Chenani to Sudhmahadev to Mantalai and Latti – a distance of over two hundred kilometers to reach Dudu valley. Descent to Dudu valley from Shiv Gali is by a road which passes through a thick forest which is not only snow bound in winter but also turns treacherous and marshy during the early spring  owing to thawing of snow.  As one approaches the valley, the coniferous forests give way to lush green terraced fields.
As one reaches the bottom of the valley, one encounters Tawi river exuding a youthful exuberance.  Carved and chiselled by the waters of Tawi river – the famed Suryaputri of the Duggar region, Dudu valley presents its sylvan surroundings to the visitors.
Forest Department has established a collection centre on the river for fallen timber pushed into river from the higher reaches.  The fast current carries the timber to the collection point which otherwise is not possible in mountainous areas inaccessible by road.
After crossing the iron-bridge over the river a traveller encounters a beautiful waterfall just on the edge of the road.  The strong gush of milky white water creates a deafening  sound showering icy cold droplets on the vehicles.  At such a sight no occupant of vehicle can deny himself an opportunity of getting a few photos clicked to bear witness to the nature’s brilliant spectacle.
The temple of Vasuki Nag in a sacred grove of Moro Oaks and Deodars in the middle of the valley is the socio-religious epicenter of this region. For centuries the people of the region have congregated and commenced the yatra  to Kailash Kund, a glacial lake in Seoj Dhar held sacred by the people living in the valleys and mountains of middle Himalayas including Bhaderwah, Bani, Billawar, Dudu-Basantgarh, Bhalessa etc.
The annual Kailash Yatra from Dudu traditionally takes two days to reach the glacial lake.  The track to the lake which is at the altitude of fourteen thousand feet can be undertaken only in monsoons when warm monsoon clouds after creeping through the valleys up to Seoj Dhar have melted most of the accumulated snow.
Dudu valley is a perfect base camp for trekking enthusiasts to explore the nature’s trail to Shiv Gali-Basantgarh-Chochru Gala to Bhaderwah.  Similary trail from Dudu to Majouri via Pachound can be undertaken.
The mountain slopes of the valley are densely forested with Oaks at the foothills, Deodars in the middle reaches followed by open mountain meadows at the top which unravel their beauty and vegetation once winter snow vanishes. The captivating natural scenery of the vale is matched by the kind and pleasant demeanour of its people.
A visit to Dudu for the biking and motoring enthusiasts should be ideally undertaken on Ramnagar-Basantgarh, Dudu-Latti, Mantalai-Sudh Mahadev-Chenani axis. The spiritual circuit has temples dedicated to Naga  cult at Tarmayan (Ramnagar), Gandh Top, Basantgarh, Shiv Gali and Dudu which ultimately give way to eminent shrines and temples dedicated to Shaivism at Mantalai, Sudh Mahadev and Gouri Kund. With the trend of Bikers clubs fast catching up in Jammu, the biking enthusiasts have a unique opportunity of both discovering the nature’s bounty and experiencing the spiritual journey with Dudu valley as its high point.
Realising the potential of angling in the Dudu valley, the Department of Fisheries has set up a Trout farm at Kirchi in Dudu Block to stock the crystal clear mountain streams endowed with highly oxygenated waters with trout which is considered to be anglers delight. A drive from Dudu valley – Jakhed towards Tehsil headquarter at Latti has a excellent view of Tawi river gushing and frothing offering favourable spots for angling.
As regards tourist infrastructure, Dudu has a lone dormitory accommodation made available by Patnitop Development Authority. A three room inspection hut of Department of Rural Development is coming up shortly. A PWD guest house and a forest hut are available at Latti which is twenty five kilometers from Dudu.
As one leaves enchanting  Dudu valley – a traveller is forced to look back at the natural beauty amidst the snow capped mountains. While the body adjusts to the city life, the soul yearns to go back again to the nature’s lap offered by the picturesque valley.
(The author is serving as Deputy Excise Commissioner)