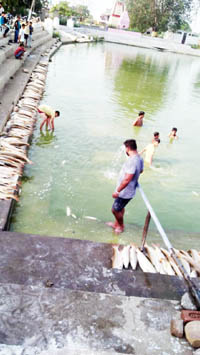 Excelsior Correspondent
JAMMU, June 12: Devotees and locals are anguished over the  death of fishes in the holy pond of Bawe-Ka-Talab at Mishriwala along Jammu-Akhnoor road where world famous Jhiri Mela is held every  year.
Click here to watch video
According to the locals, hundreds of fishes were found dead in the pond water, which had apparently turned dirty. The agitated people held the Departments of PHE and Fisheries responsible for the death of these fishes, which are worshipped by them as deities.
“Even as a team of the Fisheries Department had visited the pond two days back and declared that the water had turned dirty, no step was initiated to save the fishes,” the locals said and further alleged that the PHE authorities also didn’t take measures to ensure cleanliness of the pond water.
While elaborating, the locals further informed that thousands of devotees had taken holy dip in the pond water on the last ‘Amavasya’- dark moon lunar phase, which is considered as a pious occasion according to the Hindu belief.
“That might be the reason behind the water turning dirty but no effort was made by the Departments of PHE and Fisheries to exchange the water or take other preventive measures for saving the lives of these fishes,” locals said and informed that two years back, thousands of fishes had died under similar circumstances.
An officer in the Fisheries Department told the Excelsior that they were helpless and could not do anything to check such incidents, which hurt religious sentiments of people. “No outlet for drainage of water in such traditional ponds, high density of fishes, decrease in the oxygen level and more heat are among the reasons which lead to death of fishes,” he explained and added that the department was helpless in avoiding such situations as catching of fishes is not allowed at such religious places.