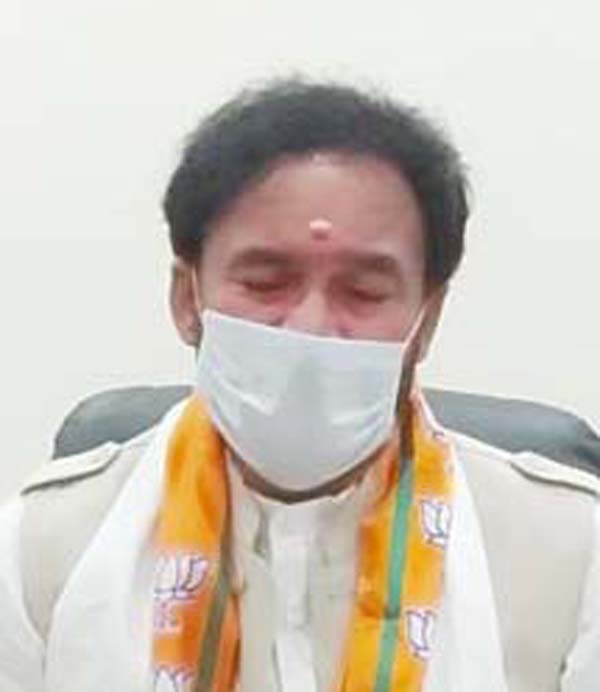 ‘Leh, Kargil to be developed as smart cities’

JAMMU, Oct 19: Lashing out at Opposition parties including Congress, National Conference (NC) and People’s Democratic Party (PDP), Union Minister of State for Home, G K Reddy today accused them of speaking language of China and Pakistan on grant of UT status to Ladakh region and Articles 370 and 35 -A which were annulled by the Narendra Modi Government last year.
The Union Minister during his two days tour to Ladakh to campaign for the BJP candidates contesting the elections to Ladakh Autonomous Hill Development Council (LAHDC), Leh was talking to reporters on the second day of his tour in Leh today.
He expressed his serious concern and dismay that all opposition parties including Congress, NC and PDP are speaking the language of China and Pakistan and their tone and tune on the abrogation of Articles 370 and 35 -A is one and that is totally unfortunate.

He said the Congress which is opposing the grant of UT status to Ladakh has no right to seek vote from the people of Leh in the ensuing LAHDC, Leh elections and appealed the people to reject the party lock, stock and barrel in the ensuing elections as it (Congress) has taken a stand against the 70 year -long struggle of people of the Ladakh region and their dream which was fulfilled by none else than Prime Minister, Narendra Modi.
Terming the annulling of Articles 370 and 35 A as well as grant of UT status to Ladakh as the internal matter of India, he said China and Pakistan have no locus standi in it, and took serious exception to recent statement of Chinese Foreign Minister, who had termed the grant of UT status to Ladakh as wrong.
Lambasting both China and Pakistan, Reddy asked who are Chinese Foreign Minister and Pakistan Premier, Imran Khan to interfere in India’s internal matters. Modi Government took the decision of UT for Ladakh for the development of this hilly region which faced constant neglect during last 70 years through the hands of successive Congress and NC Governments both at Centre and in the erstwhile State of J&K”, he added.
It is unfortunate that National Conference president, Dr Farooq Abdullah who is also MP and has been the Chief Minister of J&K several times has stated that his party will launch struggle and seek Chinese support in restoring 370 and 35-A in J&K. Even the former Home Minister and senior Congress leader, P Chidambaram has also talked of restoring 370 in J&K. In view of such irresponsible statements made by the Congress leaders the party has no right to seek votes from the people of Leh, he added.
Reddy asked “Was it right for Abdullah to make such a statement at a time when there was tension on borders with China”, ? He also questioned that how Abdullah and his party can restore Article 370 as the needles of clock can’t move backward.
The Union Minister, however, said that Indian forces are bravely guarding the borders in terrains and snow bound peaks and assured that India will not compromise on a single inch of territory. “We, should trust our valiant forces, he said while allaying fears of the people in this regard”.
Unfolding various developmental projects for the Ladakh region, he said both Leh and Kargil townships will be developed as smart cities. Earlier there was only a plan to develop two Capital Cities of J&K, Jammu and Srinagar as smart cities but after the grant of UT status to Ladakh region Modi Government decided to develop Leh and Kargil as Smart cities also, he added.
Maintaining that he, being in- charge of UT of Ladakh will make the announcement regarding development of two smart cities in coming budget session of the Parliament. He said the work on Zojila tunnel connecting Ladakh region with Kashmir Valley has started and it will be a game changer for this region to boost its trade and tourism. He said earlier the completion period of Rs 4510 crore tunnel was six to seven years but the Government has issued instructions of completing it in only four years, he added.
He said Zojila at Tunnel which will be on the height of 11578 feet will be all weather tunnel and there will be no road blockade to the region for six months of Winter after its construction.
He also said that Modi Government’s main thrust is air connectivity in the region to boost the tourism. Besides, the Government is also concentrating on exploiting the solar energy in the region as Ladakh has a lot of potential for the same. The Modi Government has framed a strategy to generate 7500 mws of solar energy in the region so that the people get 24 hours uninterrupted power supply, he added.
It is commitment of this Government that every section of society and every area should get power supply and the greatest challenge in this regard is the transmitting lines and Government is also working on that. In coming days the work on laying of transmitting lines will also be started, he added.
The Union Minister said for telecommunication connectivity, 54 towers have been constructed and if needed more will be raised . Ladakh has a lot of potential for tourism and it will be given boost, he added.
He said soon after the elections to LAHDC, Leh are over every thing will be discussed with the UT authorities and development projects will be taken in hand on the war footing basis. He announced that 5000 youth will be given jobs in UT Government besides, self employment generation will also be given thrust. An action plan will be framed in consultation with PM after elections in this regard, he added.
Allaying fears of the people, he said that Ladakh Constitutional Act will also be framed to safeguard ethnicity, culture, land, language, jobs etc of the people of the UT soon after the elections in consultation with local leaders and public representatives of the region.
He said whatever will be in the interest of the people of Ladakh, will be done by the Modi Government.