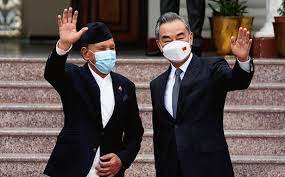 KATHMANDU, Aug 11: China has pledged Rs 15 billion in grant assistance to Nepal to invest in various projects this year in the landlocked Himalayan nation after visiting foreign minister Narayan Khadka held wide-ranging talks with his Chinese counterpart Wang Yi to further cement the bilateral ties.
Khadka, who is on an official visit to China at the invitation of Wang, met Wang in the eastern Chinese city of Qingdao on Wednesday.
“The two foreign ministers took stock of overall aspects of Nepal-China relations and agreed to promote further cooperation in various sectors, including trade, connectivity, investment, health, tourism, poverty alleviation, agriculture, disaster management, education, culture, and people-to-people exchanges, among others,” the Nepalese foreign ministry said in a statement here.
Both sides expressed satisfaction over the progress made in a range of matters of bilateral cooperation since the official visit of Wang to Nepal in March this year.
Wang, also a State Councillor, announced that China will provide a Rs 15 billion (800 million RMB) grant to Nepal to invest in projects selected by Nepal for the year 2022.
Wang also announced 3 million RMB worth disaster relief materials as per Nepal’s request.
“China will also provide Nepal with an additional 12 million RMB worth of medical items and logistics,” according to the statement.
China will provide additional COVID-19 vaccines and related medical assistance as much as required by the Himalayan nation, it said.
Khadka during the meeting also reiterated Nepal’s unwavering commitment to the one-China Policy and assured that the Nepali territory would not be allowed to be used for any anti-China activity, according to the statement.
On the other hand, foreign minister Wang reiterated “China’s continued and unconditional support to Nepal’s sovereignty, independence and territorial integrity and assured support in the country’s development endeavours as per the priority of the Government of Nepal”.
“The two foreign ministers expressed their commitment for the timely implementation of the agreements signed and understandings reached during high-level visits in the past.”
They agreed to expedite the implementation of China-assisted projects in Nepal.
The Chinese side also assured the Nepali delegation that Beijing will soon start the construction work of the second phase of Kathmandu Ring Road Improvement Project, according to the statement.
“Wang also announced that China will carry out the feasibility study of Keyrung-Kathmandu Railway under the grant assistance. He also assured support for pre-feasibility study of Nepal-China cross border transmission line as agreed during his official visit to Nepal in March 2022.”
Upon the request of the Nepali side, the Chinese side assured that it will positively consider providing chemical fertiliser to Nepal and to study the feasibility of establishing a chemical fertiliser factory in the Himalayan nation, the Foreign Ministry said, adding that the State Councilor also agreed to assist Nepal’s agricultural sector.
Wang also agreed to encourage Chinese investment in developing the manufacturing capacity of Nepal and enhance cooperation in the export of Nepali tea and traditional medicinal herbs.
The two sides also decided to establish a joint mechanism for pandemic control in border ports.
They also agreed to open Rasuwa-Kyerungand Tatopani-Jangmuports for two-way trade and Hilsa-Pulang port for one way trade as soon as the fresh wave of COVID-19 pandemic in Tibet Autonomous Region of China is controlled.
Following the bilateral talks, the State Councilor Wang Yi hosted a banquet in honor of Khadka and the members of Nepali delegation, which will return to Kathmandu on Thursday, wrapping up the two day visit to China. (PTI)