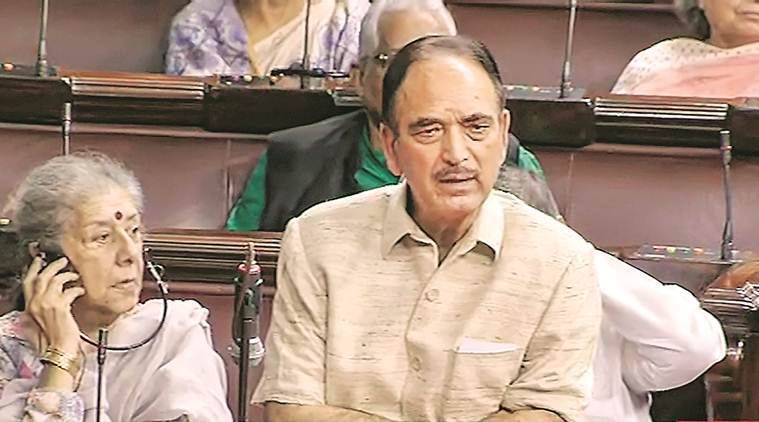 Excelsior Correspondent
JAMMU, July 1: Leader of Opposition in Rajya Sabha and former Jammu and Kashmir Chief Minister Ghulam Nabi Azad today asked the Central Government to hold early Assembly elections in Jammu and Kashmir while accusing it of running the State Government from capital under the garb of President’s rule.
“Stop running the Government from Delhi. Holding elections in the State would be the greatest Confidence Building Measure,” he said participating in debate on the statutory resolution seeking extension of President’s rule in Jammu and Kashmir by six months beyond July 3 and bill granting reservation to the people living along the International Border
Azad recalled several incidents of history to put up strong defence of Pt Jawahar Lal Nehru, the first Prime Minister of India and National Conference patriarch Sheikh Mohammad Abdullah. He said even before the independence, Nehru and Sheikh were in talks that Kashmir would be part of India.

“Nehru successfully took back many areas for India and sent two Platoons to save 40,000 refugees, who were camping in Rajouri and Poonch districts,” he said.
Worthwhile to mention here that Union Home Minister Amit Shah and Minister of State in the Prime Minister’s Office (PMO), Dr Jitendra Singh had launched frontal attacks on Nehru and Sheikh during debate on President’s Rule in Lok Sabha on June 28. However, Azad strongly defended the two leaders and their role in the history.
Referring to the Government statement on zero tolerance towards terrorism, Azad said everyone wants the terrorism to end.
“I too as a Chief Minister of Jammu and Kashmir had tried to end terror in the State. We had almost brought the terrorism to freezing point. During Congress-PDP as well as National Conference-Congress Governments, the terrorism was at its end. However, 2014 onwards (a reference towards formation of BJP-PDP Government in J&K), there have been maximum number of killings of Army men and civilians and attacks like Uri and Nagrota happened,” Azad said.
Asserting that all of them were with the Government in ending terrorism, he said it was not good for anyone and even the people of Kashmir are against it.
He said that not even a single Confidence Building Measure (CBM) was implemented out of the Common Minimum Programme (CMP) formed by the PDP-BJP Government.
Taking strong exception to latest Government orders restricting traffic between Qazigund and Nashri during Shri Amarnath Ji pilgrimage and prior to it suspension of traffic on Jammu-Srinagar Highway for two days in a week, Azad said such restrictions haven’t been imposed in any part of the country.
The Congress leader also sought doubling reservation for people living in border areas to 6 per cent from the proposed 3 per cent.
PDP Rajya Sabha member Mir Mohammad Fayyaz said Working Groups and Interlocutors appointed by the Government and All Party Delegations which visited Jammu and Kashmir in the past had submitted their reports and wanted to know what happened to them.
Batting for talks to resolve Kashmir problem, Fayyaz said the BJP has mandate and they should hold talks and win confidence of Kashmiri people.
Earlier, initiating the debate on statutory resolution, Congress member Viplove Thakur questioned why Assembly elections were not held in the State along with the Lok Sabha polls.
She also charged that the Centre was only citing Amarnath Yatra and other religious activities as an excuse for not conducting election.
“Why can’t you clearly say that ‘our motive has not been fulfilled’,” she said.
“People of J-K want to join mainstream,” Thakur said, and asked the Centre to hold early elections in the State.
Rakesh Sinha (Nominated) said the issue is of national importance and should not be seen through a political prism.
Countering Thakur, he said if the Congress had valued democracy, situation in J-K would have been different.
Sinha refuted the charge of creating division between Jammu and Kashmir, and said the BJP-led Central Government believes in ‘one people, one nation’.
He accused the Congress of doing politics of polarization in the state.
Sinha also charged that Jammu was not given due representation in the state and cited the less number of Assembly and Parliamentary seats from the region despite having larger population and area than Kashmir.
He also spoke about “injustice” to people belonging to Valmiki community in government jobs.
Ram Gopal Yadav (SP) said that the President’s rule was imposed in a hurry and efforts should have been made to form an alternative government.
Yadav said the BJP made a mistake in supporting the PDP in forming the government in the state.
He said the BJP-PDP coalition was “unnatural and bound to fail” and, in lighter vein, equated it with his party’s recent alliance with the BSP in the general elections.
AIADMK member S R Balasubramaniam said there should be Central rule till election is held in the State. However, he questioned why Assembly polls were not held with the general elections.
CPI’s D Raja criticized the Government for taking the Ordinance route on reservation issue and favoured referring bills to Standing Committee or Select Committee.
Trinamool Congress (TMC) leader Derek O’Brien also questioned why assembly elections were not held along with Lok Sabha polls when the Prime Minister himself favours ‘one nation, one election’.
He charged the Central Government with resorting to ordinance route frequently and said it should come down.
Talking about federalism, the TMC leader accused the Central Government of not co-operating with the West Bengal government.
CPM leaders K K Ragesh alleged that the government wanted to divide people on communal lines for its petty politics and opposed both the bills.
“Alienation will not help to deal with the problem of terrorism in the state. If you can conducts the Lok Sabha elections in state then why cannot the state elections be held simultaneously,” he said.
Supporting both the bills, Prasanna Acharya (BJP) said, “We cannot go on discriminating… But my only concern is that whether the bill (on reservation) approved by Parliament would be ratified later by elected State Government.”