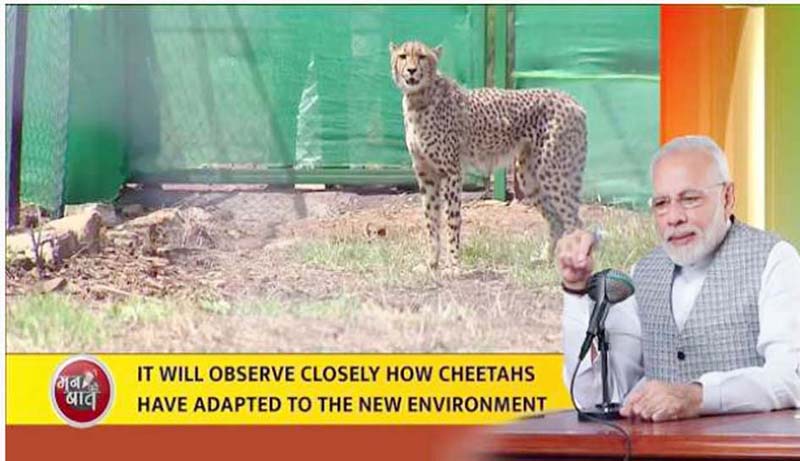 Sanjeev Pargal
JAMMU, Sept 25: Prime Minister Narendra Modi said today that along with birth anniversary of Bhagat Singh Ji on September 28, the countrymen have another reason to celebrate the day for surgical strike.
He said this in his monthly Mann Ki Baat Radio Address aired on last Sunday of the month.
“My dear countrymen, all of you have another reason to celebrate the 28th of September. Do you know what it is? I will say only two words and I know your enthusiasm will increase fourfold. These two words are—Surgical Strike,” Modi said.
“Hasn’t the Josh risen?” he asked.
Modi said: “Let us celebrate the campaign of ongoing Amrit Mahotsav in our country with full enthusiasm, sharing our happiness with everyone”.
Indian Army had on September 28, 2016 conducted surgical strikes at four places inside Pakistan across Jammu and Kashmir in retaliation to terror attack by the Pakistan-sponsored militants at an Army camp in Uri in Baramulla district of Kashmir.
Militants had targeted Army camp in Uri on September 18, 2016 and surgical strikes were conducted inside Pakistan right after 10 days.
A number of militants including their commanders, trainers and Pakistan army personnel were killed in the surgical strikes which were conducted for the first time since Pakistan-sponsored militancy erupted in Jammu and Kashmir.
On February 26, 2019, the Indian Air Force (IAF) had conducted airstrikes in Balakote deep inside Pakistan in response to Pulwama terror attack on February 14. A training camp of Jaish-e-Mohammed (JeM) militant outfit was destroyed in the air raids in which nearly 200 militants were believed to have been killed.
Modi announced that the Chandigarh airport will be renamed after Shaheed Bhagat Singh as a tribute to the great freedom fighter.
He said that September 28 is an important day of ‘Amrit Mahotsav’ when the birth anniversary of Bhagat Singh will be celebrated.
“Just before the birth anniversary of Bhagat Singh, an important decision has been taken as a tribute to him. It has been decided that the Chandigarh airport will now be named after Shaheed Bhagat Singh. It had been in the waiting for a long time,” Modi said.
He congratulated the people of Chandigarh, Punjab and Haryana, and the entire country for this decision.
“Let us take inspiration from our freedom fighters, following their ideals and build the India of their dreams… this is our tribute to them. The memorials of martyrs, the names of places and institutions named after them inspire us with a sense of duty,” he said.
Just a few days ago, the country had made a similar effort by setting up the statue of Netaji Subhas Chandra Bose on Kartavya Path and now the name of Chandigarh Airport after Shaheed Bhagat Singh is another step in that direction, he noted.
Referring to the release of eight Cheetahs from Namibia in Kuno national park in Madhya Pradesh, Modi said 130 crore Indians are happy and full of pride.
Such is India’s love for nature, he said.
Noting that a common question posed by people is when will they get an opportunity to see the cheetahs, Modi said a task force has been formed which will monitor the cheetahs and see how much they have been able to adapt to the environment here.
Modi said competition will be organised on the MyGov platform in which people could share certain things like what should be the name of the campaign that is being run on cheetahs and naming all these cheetahs could also be thought about.
“By the way, if the naming is done the traditional way, it will be very nice since anything related to our society and culture, tradition and heritage, draws us easily,” he said.
“I appeal to all of you to participate in this competition. Who knows…you may be the first to get an opportunity to see a cheetah as a reward!” the prime minister said.
Paying tribute to BJP ideologue Pt Deendayal Upadhyay, Modi said the more the youth of any country take pride in their identity and honour, the more their original ideas and philosophies attract them.
“The biggest feature of Deendayal ji’s thoughts is that in his lifetime, he had seen the great upheavals of the world.
”He had become a witness to the struggles of ideologies. That is why he put forward an idea of ‘Ekatma Manavdarshan’ and ‘Antyodaya’ before the country which was completely Indian,” Modi said.