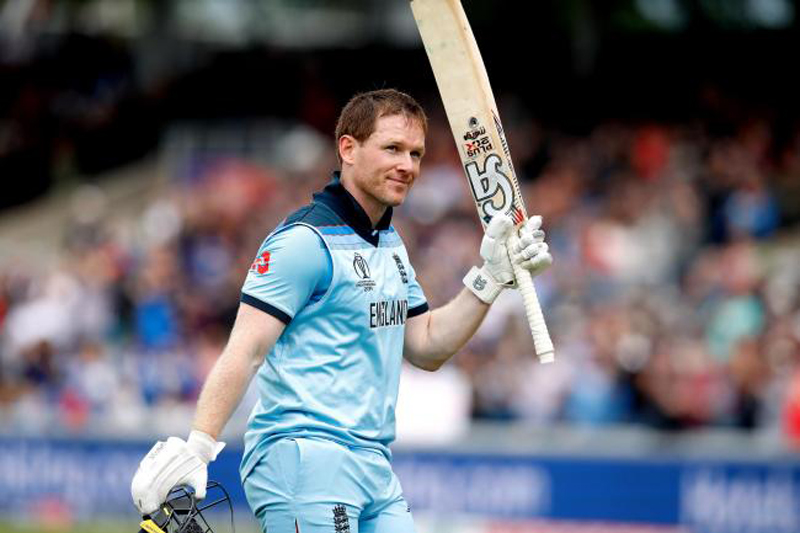 Manchester, June 18: England captain Eoin Morgan smashed a world record 17 sixes in his blistering 71-ball-148 as the hosts crushed Afghanistan by 150 runs in a World Cup encounter here today.
England scored their highest World Cup total 397 for 6 riding on brilliant batting performances of Morgan, Joe Root (88 off 82) and Jonny Bairstow (90 off 99).
The Afghans were never in the contest and managed only 247 for 8 with Adil Rashid picking up 3 for 66 and the talented Jofra Archer taking 3 for 52.
With this win, England moved a step closer to the semi-final qualification with four wins from five matches while Afghanistan are out of the competition having lost all five games.
Today’s game belonged to England captain, who enroute his career-best knock also hit the fourth fastest hundred in World Cup history, getting his 13th ODI hundred off only 57 balls. Apart from 17 sixes, the left-hander also hit four boundaries.
Morgan broke the record which was jointly held by Rohit Sharma (vs Australia 2013), AB de Villiers (16 vs West Indies, 2015) and Chris Gayle (16 vs Zimbabwe 2015).
Opener Bairstow and Root also played their part but were overshadowed by the skipper, who pulverised the hapless Afghan bowling attack.
Afghanistan’s T20 superstar Rashid Khan got a reality check as he also had the ignominy of being hit for a ‘100’. His bowling figures read a pathetic 9-0-110-0 with 11 sixes being hit off his bowling.
Rashid’s figures were the worst by any bowler in a World Cup game beating New Zealand’s Martin Snedden’s 0/105 off 12 overs (60 overs per side) against England in the 1983 World Cup .
Morgan primarily targeted the arc between long-on and long-off and repeatedly dispatched the length balls in between these areas with a few straight sixes. He was particularly severe on Rashid, who till date has never been hit for more than two sixes in his innings.
The other IPL star Mohammed Nabi (0/70 in 9 overs) also got a pasting and so did Gulbadin Naib as Morgan and Root added 189 runs in 16.5 overs. In all, the English batsmen hit 25 sixes.
Even Moeen Ali had a little feast towards the end of the innings, scoring 31 off 15 balls with four sixes. (PTI)