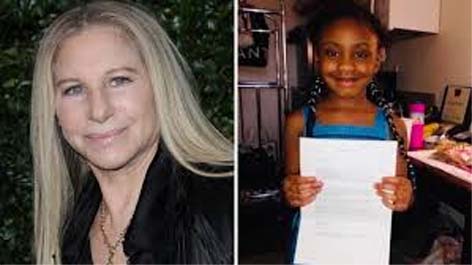 Los Angeles, Jun 15: Veteran actor-singer Barbra Streisand has helped George Floyd’s six-year-old daughter Gianna become a Disney shareholder.
Gianna posted a photograph on her Instagram account holding her Disney shares certificate and thanked Streisand.
“Thank You @barbrastreisand for my package, I am now a Disney stockholder thanks to you,” Gianna wrote.
The gift package included Gianna’s new stock portfolio as well as a copy of Streisand albums ‘My Name is Barbra’ (1965) and ‘Color Me Barbra’ (1966).
Floyd, a 46-year-old African American man, died last month in Minneapolis, Minnesota after a white police officer knelt on his neck for nearly nine minutes in an encounter caught on video. The officer, Derek Chauvin has been charged with murder and manslaughter.
Following the incident, thousands have taken to the streets across the country to express their anger at the systemic racism and police brutality.
Earlier this month, rapper Kanye West also set up a college fund to cover tuition for Gianna. (PTI)