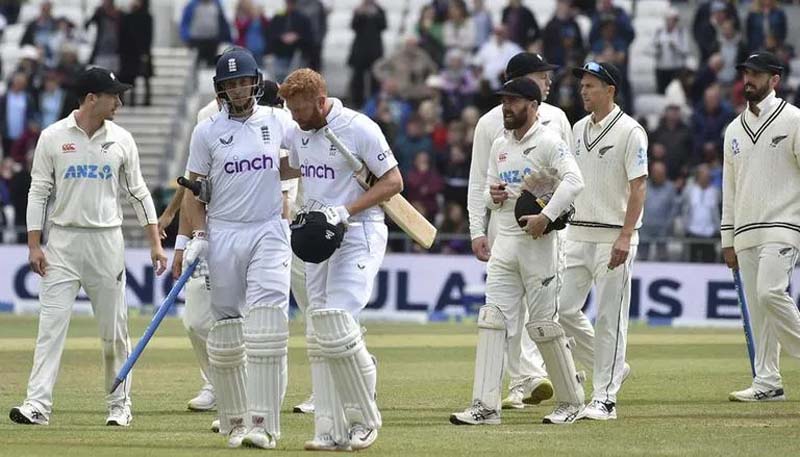 LEEDS (England), Jun 27:  A dominant England swept New Zealand 3-0 in the test series with an aggressive seven-wicket victory in the third and final test on Monday.

After the first session was washed out due to rain on the final day, England motored to 296-3 in the middle session after resuming on 183-2.

“A 3-0 win against the best team in the world, it’s absolutely phenomenal,” Ben Stokes said after his team beat the world test champions in his debut test series as captain.

“It’s about the change of the mindset of the lads towards test cricket. To say that we have done it so quickly is unbelievable. Huge credit to (coach) Brendon (McCullum) and the backroom staff.”

Joe Root (86 not out) and Jonny Bairstow (71 not out) flayed New Zealand bowlers at Headingley, hitting boundaries at will in a blistering 111-run stand as England cruised to the target in just over an hour on the fifth day.

Bairstow, whose masterful 162 lifted England from a precarious 55-6 in the first innings, played yet another aggressive knock as he registered England’s second fastest-ever test half century off just 30 balls.

Bairstow finished off the game in style when he belted off-spinner Michael Bracewell for a four and a six in a superb 44-ball unbeaten knock.

“It was like some of the 50-over stuff,” Root said while describing Bairstow as a “phenomenal player” after England knocked off the remaining 113 runs in 15.2 overs on the last day.

“He (Bairstow) has been hitting the ball really well … it’s great to see him do that, to bat with the confidence and freedom.”

New Zealand had started the day on a high when Tim Southee had Ollie Pope (82) clean bowled in the first over when play resumed after lunch. Pope, who hit 12 boundaries, took the game away from New Zealand with a brilliant 134-run stand with Root before his off stump was knocked over by Southee.

But Bairstow once again exhibited his power-hitting prowess as he provided Stokes and new coach Brendon McCullum a perfect start to their new roles.

Bairstow’s classy century and debutant Jamie Overton’s 97 revived England in the first innings before it was bowled out for 360 in reply to New Zealand’s 329.

Left-arm Jack Leach ended up with his maiden 10-wicket haul in a test match before New Zealand did well to score 326 second time around which set England a target of 296 runs.

New Zealand had fought back through its two prolific run-getters in the series — Tom Blundell (88 not out) and Daryl Mitchell (56) — in the second innings but the top order’s struggle in the series let down the Kiwis.

“It’s been an incredible series,” said New Zealand skipper Kane Williamson, who contracted coronavirus and missed out the second test. “There is a new theme to their (England) approach and they won those fine margins that went a long way in perhaps deciding the outcome of the match.”

England won the first test by five wickets at Lord’s and then chased down 299 runs at Nottingham for a five-wicket win in the second test.

The complete transformation of England’s test team that has seen its batters twice chasing down close to 300-run targets in two successive test matches will give Stokes and McCullum confidence going into the test match against India from Friday.

“India are a different opposition, but we will come out with the same (aggressive) mindset,” Stokes said.  (AP)