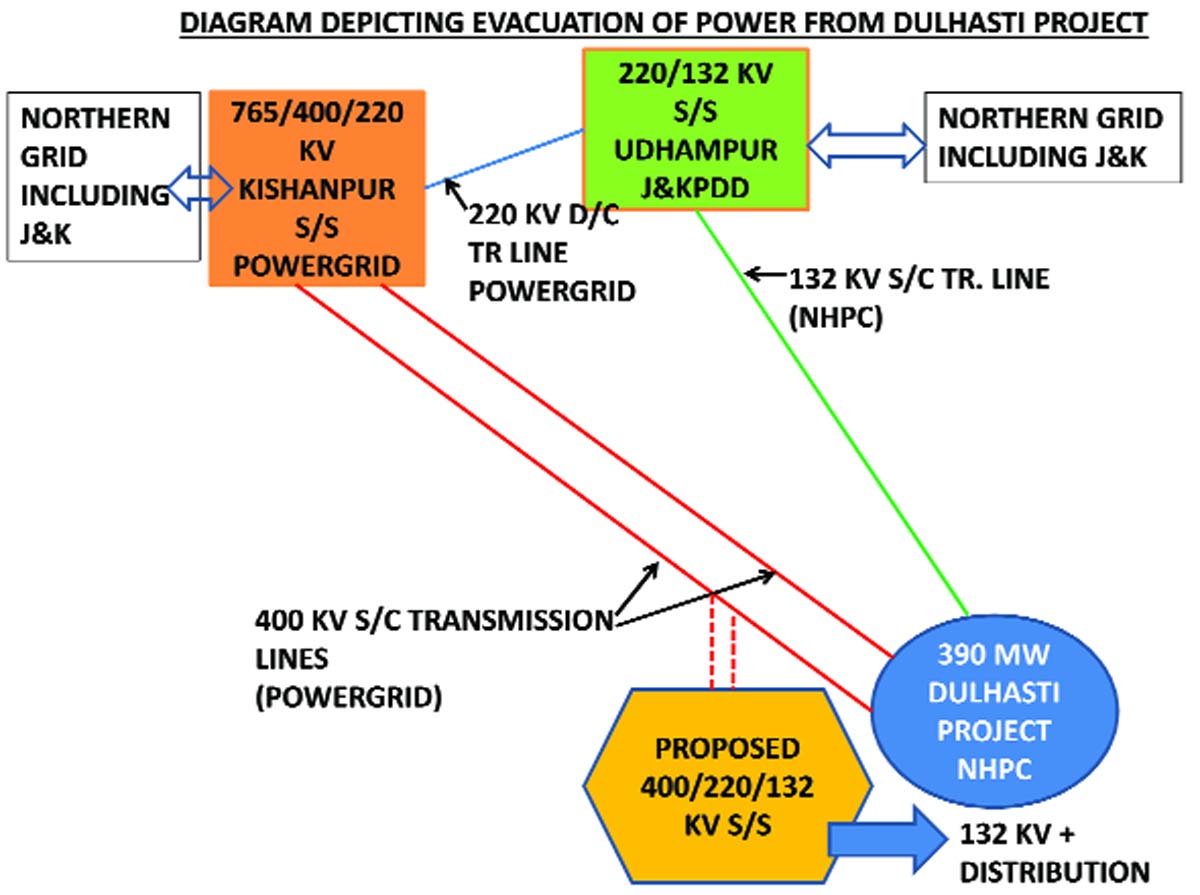 Jagmohan Sharma
Once again Kishtwar & adjoining areas are without electricity for last few days. And this is not the first time & is not going to be the last if corrective technical measures are not taken to avert this condition. Previously too same situation has been faced by Kishtwar & adjoining areas when the 132 KV line between Udhampur Sub Station of J&KPDD & Dulhasti Project of NHPC failed because of snowfall during winter months.
It is a paradox that the District that is home to 390 MW capacity Dulhasti Hydroelectric Project of NHPC fails to provide electricity to the populace of Kishtwar & adjoining areas when it’s requirement is the most, that is, during the winter months. The cause for this is a technical short-sightedness.
The Dulhasti Project wheels power to the Northern Grid including J&K state (which is a constituent of Northern Grid) through two 400 KV lines owned by POWERGRID. These lines connect Dulhasti Project to the 945 MVA capacity Kishanpur Sub Station of POWERGRID. Kishanpur Sub station is further connected to Udhampur sub station of J&KPDD through a double circuit 220 KV Line. The 220 KV sub station of J&KPDD is in turn connected to their sub station at Kishtwar.
And herein lies the issue. Udhampur Sub Station of J&KPDD is connected to their’s Kishtwar sub station on a single 132 KV S/C Transmission Line.
This effectively means that the power is exported from Dulhasti Project to Kishanpur Sub Station first over the 400 KV Lines & then it is wheeled back to Kishtwar on a 132 KV line. This line was constructed in 1985/86 for supplying construction power to Dulhasti Hydroelectric Project.
Speaking simply, it means that power from Dulhasti project travels 117 km first, over a robust 400 KV power network to reach the Northern Grid & then has to travel back to Kishtwar for feeding power to Kishtwar & adjoining areas on a weak & singular 132 KV single circuit line.
J&KPDD had also started construction of a 132 KV line between Ramban & Kishtwar / Thathri but this line never came up & probably stands abandoned because of contractual problems.
How can this problem be resolved?
The perennial problem of power supply to Kishtwar & adjoining areas, in the event of failure of 132 KV Transmission Line, can be addressed by constructing a 400/220/132 KV sub station at Kishtwar by LILOing (Line in Line out) anyone of the two existing 400 KV Transmission Lines. The sub station can further be connected downwards on 132 KV level for further connectivity to the 33 KV distribution network of the area.
A similar arrangement has also been made to cater to the load requirement of North Kashmir where the 400 KV Wagooa – Uri Transmission line has been LILOed (tapped) at Amargarh sub station. This staion is further connected to the 400 KV Samba – Jallandhar Transmission line owned & operated by Sterlite Power. In fact plan for the pooling station station at Kishtwar was put up to Northern Region Power Committee (NRPC) at the same time as the the Jallandhar – Samba – Amargarh network, but because of the thrust by J&KPDD for the Amargarh network the Kishtwar sub station / network did not get the seriousness that was required.
In fact Sh.G.M.Saroori, MLA Inderwal & Ex Cabinet Minister, took up this issue with Mr. Omar Abdullah, the then CM of J&K in 2012/13 after the Amargarh system was approved but no headway could be achieved.
It is also understood that the plan for having a pooling station in Kishtwar was approved in principle in the Standing Committee of power planning of Northern Region, which held a meeting at Delhi on 02.01.2013. The committee is a part of the Central electricity Authority (CEA) that falls under the Ministry of Power GoI. The pooling station was envisaged to wheel power from the hydro power stations that are planned to come up in the Chenab basin. In this meeting 220 KV level was not envisaged but a revised plan can include this provision as well. In fact the recently commissioned 400 KV Dulhasti – Kishanpur transmission line is also a part of the network to evacuate power from the planned power stations & also provides an alternative route for evacuation of power from Dulhasti project.
Futuristically speaking, when the load in the area increases, a 220 KV level system may also become essential & in such an eventuality the 220 KV network will have to be laid down & it will be much easier to connect it to the planned 220 KV sub station.
The proposed sub station above will not only improve power availability in Kishtwar & surrounding areas but will also improve quality of power in the entire region.
feedbackexcelsior@gmail.com