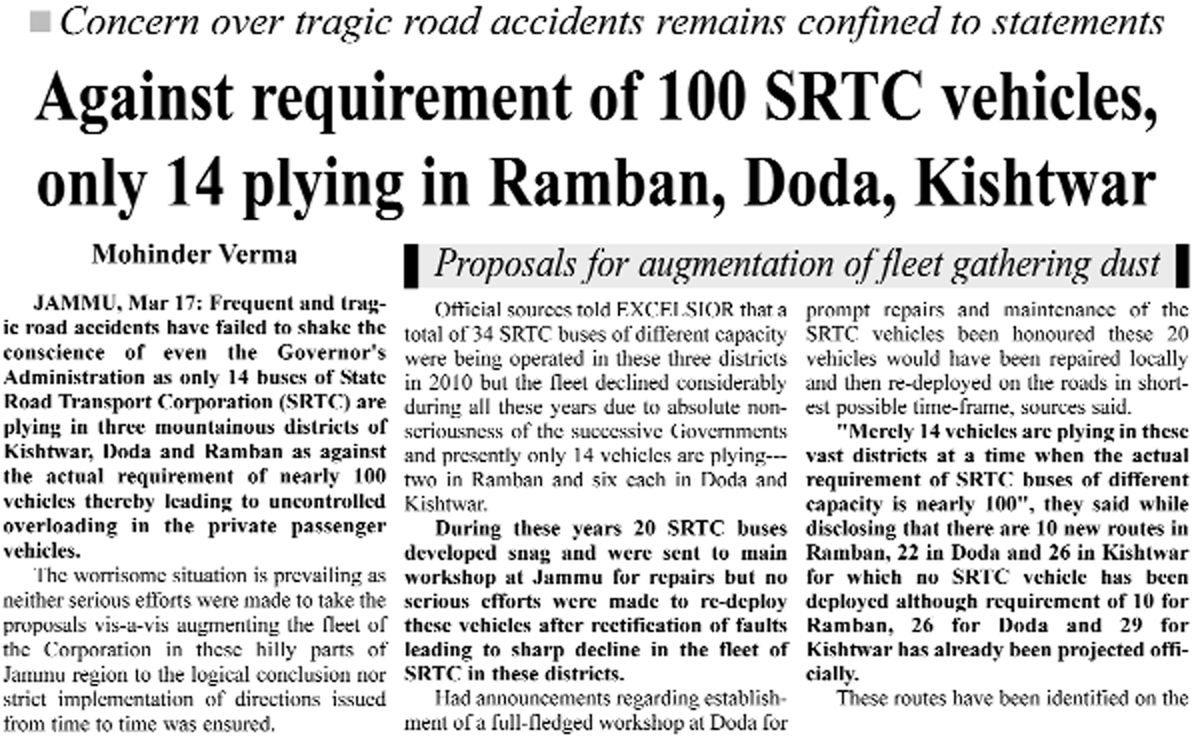 Mohinder Verma
JAMMU, July 1: Absolute non-serious approach of the Government towards a proposal to augment the fleet of Jammu and Kashmir State Road Transport Corporation (SRTC) in erstwhile Doda district is also responsible for today’s tragic road accident in Kishtwar district as Keshwan-Kishtwar was among 58 routes which were identified for immediate deployment of buses of the Corporation long time back.
The Excelsior in its edition dated March18, 2019 had forewarned the Government of the impending threat of tragic accidents in Kishtwar, Doda and Ramban by exclusively highlighting that only 14 buses of SRTC are plying in these mountainous districts as against the actual requirement of nearly 100 vehicles thereby leading to uncontrolled overloading in the private passenger vehicles.
It was also mentioned in the report that there are 10 new routes in Ramban, 22 in Doda and 26 in Kishtwar for which no SRTC vehicle has been deployed although requirement of 10 for Ramban, 26 for Doda and 29 for Kishtwar was projected officially long time back.
All these routes were identified on the persistent demand of the people of those areas, which have been brought on the road connectivity map following completion of works on roads taken up under different schemes particularly Pradhan Mantri Gram Sadak Yojana (PMGSY).
Had appropriate action been taken on the proposal about augmentation of fleet of SRTC vehicles in these three districts, today’s tragic accident on Keshwan-Kishtwar road could have been avoided as this route was among 29 identified by none else than the State Road Transport Corporation’s field staff in the Kishtwar district, official sources told Excelsior while disclosing that at present three SRTC vehicles are plying in Ramban and six in Kishtwar and four in Doda.
“Earlier, SRTC was operating its bus(es) on Keshwan-Kishtwar route but following depletion of fleet it had to stop the service abruptly and since then overloading in the private passenger vehicles has become a routine”, sources said, adding “keeping in view limited number of private passenger vehicles the people have been left with no other option but to risk their lives by resorting to overloading in order to reach their destinations”.
They informed that a total of 34 SRTC buses of different capacity were being operated in these three districts in 2010 but the fleet declined considerably during all these years due to absolute non-seriousness of the successive Governments.
“The SRTC vehicles continued to develop snag one after another and accordingly they were sent to main workshop at Jammu for repairs but no serious efforts were made to re-deploy these vehicles after rectification of faults leading to sharp decline in the fleet of SRTC in these districts”, sources further said.
It may be recalled that on October 10, 2018, Principal Secretary to Government, Transport Department, Dr Asgar Hassan Samoon had issued direction for deployment of additional buses for various routes of erstwhile Doda district. But, neither direction was implemented nor reasons behind the same were ascertained.
“The non-serious approach in augmenting the fleet of the Corporation in Kishtwar, Doda and Ramban is notwithstanding the fact that an amount of Rs 10 crore was earmarked for this exercise several months back”, sources further said, adding “even announcements made from time to time for establishment of a full-fledged workshop at Doda for prompt repairs and maintenance of the SRTC vehicles have not been honoured till date”.
An officer of the SRTC, while wishing anonymity said, “unless fleet of the SRTC is augmented in these three hilly districts overloading in private passenger vehicles and subsequent tragic accidents cannot be checked”, adding “decisions are generally taken at the highest level and we have played our role by projecting requirement of exact number of SRTC vehicles particularly for starving routes”.
“Merely issuing statements to express shock and grief over loss of lives in the road accidents is not going to change the situation on ground. If the Government is really serious in checking the menace up to large extent it should first ensure adequate number of SRTC buses in hilly areas to check overloading in private passenger vehicles”, several members of civil society of these districts told Excelsior on telephone while expressing anguish over today’s tragic accident.