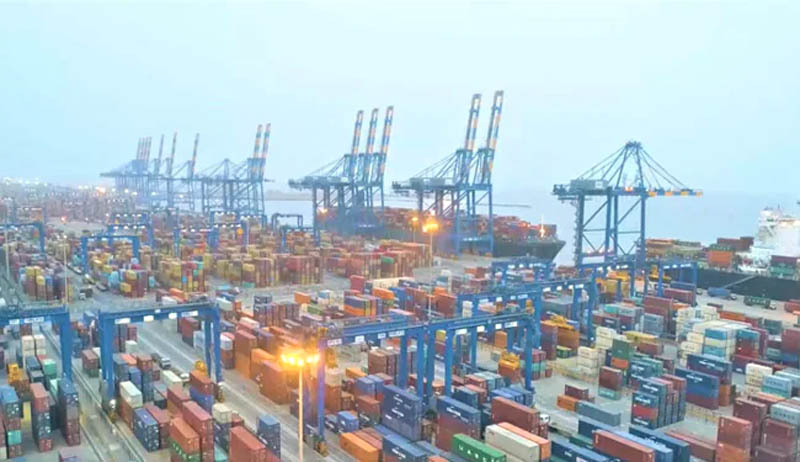 NEW DELHI, May 25:
Adani Ports and Special Economic Zone Limited (APSEZ) has reported a 21.78 per cent decline in consolidated net profit at Rs 1,033 crore for the fourth quarter ended March 2022.
The country’s largest integrated logistics player had clocked a consolidated net profit of Rs 1,321 crore in the corresponding period of the previous fiscal, according to a BSE filing on Tuesday.
Consolidated total income of the company increased to Rs 4,417.87 crore for the fourth quarter of the last fiscal as against Rs 4,072.42 crore in the year-ago period.
Total expenses also rose to Rs 3,309.18 crore in the latest quarter under review as against Rs 2,526.91 crore in the same period a year ago.
Chief Executive Officer and Whole Time Director of APSEZ Karan Adani said FY22 has been a stellar year for APSEZ, with achievement of various milestones for itself and new benchmarks for India’s maritime industry.
According to a company statement , it did a record cargo volume of 312 MMT with Mundra port alone handling 150 MMT, a feat never achieved by any other commercial port in the country.
The company also reported a 5 per cent decline in consolidated net profit at Rs 5,048.74 crore in FY22 as against Rs 4,795.24 crore in FY21.
In 2021-22, consolidated revenue (excluding Gangavaram) grew by 27 per cent to Rs 15,934 crore on the back of well-rounded growth registered by three key business segments — ports, logistics and SEZ.
The statement said the growth in cargo volume in 2021-22 was led by dry cargo (42 per cent increase), followed by containers (14 per cent) and liquids (19 per cent).
Adani Logistics Ltd (ALL) registered a 29 per cent growth in rail volume at 4,03,737 TEUs and a 19 per cent growth in terminal volume at 3,01,483 TEUs.
As per the statement, the acquisitions in FY22 implied an investment of around Rs 11,400 crore for APSEZ and was successfully managed alongside an organic capex of around Rs 3,750 crore.
“We cruised on our journey of becoming India’s largest transport utility with achievement of various milestones by our logistics business.
“These include investment in around 100 trains, eight operational MMLPs and total grain silo capacity of around 1.2 MMT, all by FY23,” the statement said.
During 2021-22, APSEZ concluded two very strategic partnerships ensuring sustainable business growth.
“The first being a JV with John Keells Holdings and Sri Lanka Port Authority for construction of Colombo West International Terminal-II; and the second is a partnership with Flipkart for the construction of a 5,34,000 sq ft fulfilment centre in the upcoming logistics hub at Mumbai,” the statement said.
APSEZ through its subsidiary, The Adani Harbour Services Ltd (TAHSL), has acquired 100 per cent stake in Ocean Sparkle Ltd (OSL).
The company in it’s strategic, operational and financial highlights for FY22 said APSEZ initiated construction of new warehousing facilities at Mumbai, Indore, Palwal, Ranoli, Kochi and Virochannagar, totaling 4 million sq ft with likely commissioning by Q4 FY23.
Adani Agri logistics is constructing five projects of 2,50,000 MT capacity at Panipat, Kannauj, Dhamora, Darbhanga and Samastipur, APSEZ said.
Two of these projects will be commissioned in H1FY23, one in H2FY23 and rest in FY24, it added. (PTI)
The company recently signed a share purchase agreement for the sale of Myanmar asset at a price that will enable APSEZ to recover the entire investment, APSEZ said.
It said the container terminal at Colombo (WCT I) achieved financial closure in February 2022 and construction will begin soon. (PTI)