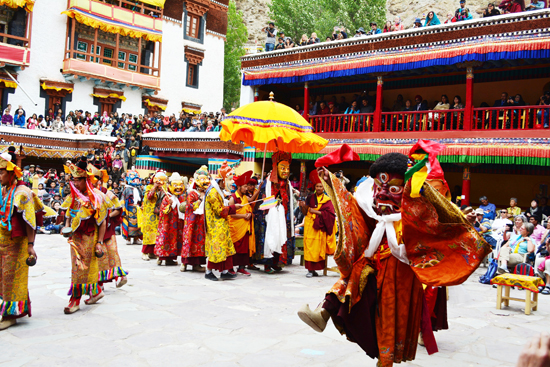 Excelsior Correspondent
LEH, June 25: The legendary Hemis festival, popularly known as Hemis Tses-Chu to commemorate the birth anniversary of Guru Padmasambhava, also known as second Buddha, concluded here.
The annual day Hemis Festival is celebrated on the 10th day of the fifth month of Tibetan lunar calendar, which is believed to be the birth anniversary of Guru Padmasambhava, who introduced and flourished Vajrayana Buddhist tradition in the entire Himalayas.
The main attraction of the festival was the colourful mask dance by monks of the monastery wearing their best robes with different gestures of hands and legs signifying good prevailing over evil. This performance enthralled the spectators.
The initial mask dancers included 13 black hat dancers comprising 13 monks who appeared wearing a complete tantric dress with great symbolic meaning.  Then sixteen dancers wearing copper gilded masks captivated the audience. These are believed to be the divine fairies. Then there were the eight manifestations of Guru Padmasambhava which are the principal forms he assumed at different points in his life.

Click here to Watch video
Later, in the afternoon session, there were twelve Zhing Kyong dancers, protectors of the Buddha’s teachings. Then Serkyem, a libation or beverages offering rites was performed by the Lobpon (main teacher) of Hemis.
Thousands of spectators amidst religious festivity mood thronged Ladakh’s biggest Monastery-Hemis to witness the spectacular mask dances performed by the monks with the rhythmic beats of religious musical instruments while chanting prayers to bring peace, prosperity and harmony in the society.
While responding to media query, Head Lama of the Monastery Drukpa Thuksey Rinpoche said that keeping the centuries old tradition alive, Hemis Monastery has been celebrating the three days annual festival to pay homage to the Padmasambava. He added that the famous Hemis festival is not just a symbolic festival but a sacred ritual to bring peace, prosperity and harmony among all sentient beings in the entire world. He added that people with undaunted faith and devotion visit monastery to witness the festival with religious fervour and gaiety.
Member Secretary NALSA, Alok Agarwal, Judge J&K High Court Justice Tashi Rabstan, Deputy Commissioner Avny Lavasa, SSP Shargun Shukla, Army officers, and leaders from political and religious organisations attended the festival.