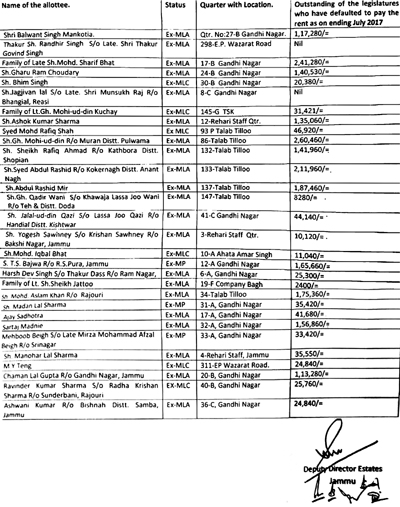 Owe over Rs 23 lakh to Govt for official accommodation
Mohinder Verma
JAMMU, Sept 24: Twenty five former Legislators and three former Members of Parliament are in the list of defaulters of the Estates Department for their failure to pay timely rent for the official accommodation which was actually allotted to them when they were sitting members of Legislature and Parliament but have been retained even after relinquishing the offices. An amount of over Rs 23 lakh is outstanding against them mainly because of the inability of the Government to enforce the framework approved by the State Administrative Council headed by Governor N N Vohra early last year.
This has come to the fore from the information provided by the Deputy Director Estates Jammu-cum-Public Information Officer Satish Kumar Sharma in reply to an application filed by Advocate Irtiza Mushtaq under Jammu and Kashmir Right to Information Act.
As per the information provided vide Communication No.DDE/J/2017/ RTI/950 dated September 16, 2017, a total of 19 former MLAs, 6 former MLCs and three former Members of Parliament have defaulted in payment of timely rent for the Government accommodation provided to them by the Estates Department in different locations of Jammu like Gandhi Nagar, Wazarat Road, Rehari, Talab Tillo, Ahata Amar Singh and Company Bagh when they were sitting members of Legislature and Parliament.
Though as per the law governing allotment of accommodation to the Legislators and Members of Parliament and the framework approved by the State Administrative Council (SAC) headed by Governor N N Vohra, the members of State Legislature or Parliament are supposed to vacate the official quarters and bungalows on relinquishing of the office yet these 28 former Legislators and former Members of Parliament are still occupying the Estates Department accommodation in blatant violation of rules.
“It is unbecoming on the part of these ex-Legislators and ex-Members of Parliament to not only retain the Government accommodation but also default in timely payment of rent to the Estates Department”, official sources regretted, adding “it is a matter of concern that the public functionaries, who are supposed to be role model for the common masses not only when they are the members of either of the Houses of the State Legislature or Parliament but even after demitting the office, are acting in an inappropriate manner”.
As per the information, maximum amount of Rs 2,60,460 is outstanding against former MLA Gh Mohi-ud-Din, who has retained Estates Department quarter at Talab Tillo, as on ending July 2017. He is followed by family of former MLA Mohd Sharif Bhat with an outstanding rent to the tune of Rs 2,41,280 for the quarter allotted at Gandhi Nagar. The third highest defaulter is former MLA Syed Abdul Rashid, who owes an amount of Rs 2,11,960 to the Estates Department for the quarter allotted at Talab Tillo.
The outstanding against former MLA from Udhampur Balwant Singh Mankotia is to the tune of Rs 1,17,280 while as former MLA and Minister Gharu Ram Choudhary has defaulted in payment of Rs 1,40,530 rent for the accommodation allotted at Gandhi Nagar.
Similarly, an amount of Rs 1, 35,060 is outstanding against former MLA Ashok Kumar Sharma; Rs 1,41,960 against former MLA Sheikh Rafiq Ahmed, Rs 1,87,460 against former MLA Abdul Rashid Mir; Rs 1,65,660 against former Member of Parliament T S Bajwa; Rs 1,75,360 against former MLA Mohd Aslam Khan; Rs 1,56,860 against former MLA Sartaz Madni and Rs 1,13,280 against former MLA Chaman Lal Gupta.
The other defaulters are former MLC Syed Mohd Rafiq Shah, former MLA Ghulam Qadir Wani, former MLA Jalal-ud-Din Qazi, former MLA Yogesh Sawhney, former MLC Mohd Iqbal Bhat, former MLA Harsh Dev Singh, former Member of Parliament Madan Lal Sharma, former MLA Ajay Sadhotra, former MP Mehboob Beigh, former MLA Manohar Lal Sharma, former MLC Ravinder Kumar Sharma and former MLA Ashwani Kumar.
Only two former MLAs Thakur Randhir Singh and Jagjivan Ram have nothing outstanding against them for the accommodation in their possession at Wazarat Road and Gandhi Nagar.
Stating that Government was also responsible for the prevailing situation, sources said, “the Government has failed to enforce the framework to rationalize retention of facilities like Government accommodation which was approved by the State Administrative Council headed by Governor N N Vohra in the month of March 2016”.
As per the Standing Operating Procedures (SOPs) approved by the Governor, the permissible period for retention of Government accommodation in case of expiry of the term/termination of appointment/relinquishing of office of constitutional dignitaries, the Ministers/Legislators and other is one month.  Had there been strict compliance to these SOPs the prevailing situation could have been avoided.