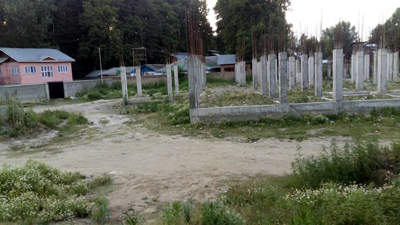 Suhail Bhat
KULGAM, June 27: The construction work on the 50-bedded Sub-District Hospital in Qoimoh area of South Kashmir’s Kulgam district has not been completed even after 15 years of approval and authorities blamed meager funding for the delay.
In 2003, the Government planned to increase the capacity of existing Primary Health Centre (PHC) and build a 50 bedded sub-district hospital at Qoimoh with an estimated cost of Rs 19.32 crores. The PHC besides being insufficient to cater to the rush of patients lacked space and was in dilapidated condition. Construction work started in 2008, but in 2016 work was suspended as funds fell short.
Although the Government in recently held District Board meeting announced that the hospital has been put under Prime Minister’s Development Fund, last year Prime Minister Narender Modi announced Rs 9000 crore of package for development of health scenario in the State, the construction work has failed to pick up.
However, the local administration denied any such advancement in the project. “We have not received any communication in this regard,” Deputy Commissioner Kulgam, Sajad Hussain, said, adding the construction work was stalled for last three years due to alleged discrepancies in the spending of funds.
With doubts over the spending of funds, a three-member committee was set up by the Government to look into the matter but they failed to produce a report despite the passage of more than three months.
Official sources told Excelsior that one of the reasons the hospital construction remains incomplete as the required amount was never released by the Government at the appropriate time.
Out of total Rs 19.32 crores a little over Rs 4 crores have been released so far and in absence of remaining Rs 15 crores the construction work has been halted while the site had turned into the den of anti-social elements like gamblers, drug addicts and drunkards.
The locals said that due to a low quality of healthcare services they were forced to turn to local private healthcare which was expensive and unregulated. “The private clinics are unaffordable to low-income groups and health services are also not uniform,” Rafiq Ahmad, a local said.
They said that Government’s failure to complete the project showed the indifferent nature of authorities towards the rural healthcare. They said with the coming up of hospital they were hoping an end to their healthcare woes but Government’s failure to complete the project has plunged them into despair. “The building was meant to provide better healthcare facilities to residents but authorities have fooled people with the announcement. The existing PHC is understaffed and lacks diagnostic facilities,” Bashir Ahmad, a local said.
Asked why the construction work was stalled the Deputy Commissioner Sajjad Hussain said: “The scarcity of funds has delayed the project. We had flouted new tenders a few months back but the process was stopped after the local lawmaker claimed that the Hospital has been put under PMDP. We are waiting for the formal orders in this regard,” he said, adding if the claim is proved false they would resume the tendering process.